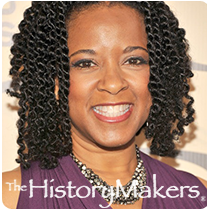 Actress T’Keyah Crystal Keymáh was born in Chicago, Illinois, on October 13, 1962. By the age of three, Keymáh was singing and dancing, and in high school she joined the Mary Wong Comedy Group. After high school, Keymáh attended Florida A & M University’s School of Business and Industry.

While attending Florida A & M, Keymáh began teaching theater, dance, and pantomime. Upon graduation, she returned to her native Chicago, where she worked as a substitute teacher while performing at some of the city’s most renowned theaters, including ETA and the Goodman. Keymáh first broke onto the television scene with a role on Quantum Leap in 1989; the following year, she joined the cast of In Living Color. During Keymáh's five years with In Living Color, she was nominated for an NAACP Image Award and a Soul Train Comedy Award. Over the next several years, Keymáh was a cast member in a number of other television shows, including On Our Own, Waynehead, The Show, and, most notably, as Bill Cosby’s daughter on Cosby. Keymáh also had roles on Roc, The Commish, and The John Larroquette Show, as well as doing voice-over work on Batman Beyond and Pinky and the Brain. Keymáh also made several movie appearances, including Jackie Brown and The Gilded Six Bit.

Keymáh went on to do a variety show, T’Keyah Live!…Mostly: A True Variety Show, which received rave reviews; she also appeared on the Disney Channel’s highly rated program, That’s So Raven. Keymáh produced the acclaimed short film Circle of Pain and was the executive producer of One Last Time.

In addition to her acting and producing, Keymáh is the author of Natural Woman / Natural Hair: Hairstyles and Hairstories From the Front; she also co-hosted the national ACT-SO awards, and the Orange and Aloha Bowl parades. Keymáh's alma mater, Florida A & M, has given her their second highest honor, the Meritorious Award; she is also listed among their 100 most influential FAMUans of the Century.

See how T'Keyah Crystal Keymah is related to other HistoryMakers
Donate Now
Click Here To Explore The Archive Today!