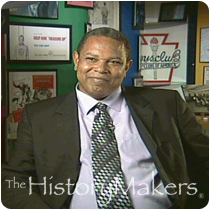 See how Timothy Lee Richardson is related to other HistoryMakers

Tim Richardson was born on July 28, 1958, in Los Angeles, California, to teenage parents, Christeale Dandridge and Irving Mothershed. His mother passed away when he was four years old, and he did not meet his father until he was thirty-five years old. Richardson’s grandmother, Alyce Dandridge, raised him and his brother, Lee, in South Central Los Angeles, in the Pueblo Del Rio Housing Projects.

Having recognized that Richardson was an honor roll student with a gift for creative writing and a talent for sports, his extended family decided that he and his brother needed an opportunity to get a better education. Richardson was invited to live with his Aunt Della and Uncle Bob Goodwin, the first African American network television screenwriter, who lived in Bel Air, California. Richardson attended University High School, formerly Warren G. Hardin High School, alongside the children of movie stars, and graduated in 1976.

Richardson played basketball for West Los Angeles Community College and was recruited to play for Chapman College (now University). When his scholarship ended, he began a work-study program that landed him his first position at the Boys & Girls Clubs of America (BGCA). Richardson married and began to work full-time, holding various leadership positions in the BGCA’s Program Services Department and attending classes at Chapman College; he received his B.S degree in business administration and marketing in 1986.

In 1987 Richardson joined the BGCA national staff to manage the Olympic Sports Program, a sports training and development initiative with funding from the United States Olympic Committee. Richardson managed the Fourth Cliff II Civil-Military Teen Apprenticeship Program, an alliance between the U.S. Army Reserve Command and community groups in thirteen cities. He was one of three civilian consultants invited by the Department of Defense to revamp youth services policy for all military branches and was the lead negotiator in affiliating all 461 on-installation military youth centers with the Boys & Girls Clubs of America.

Prior to his appointment in June 2003 as Vice President of Military Services and International Projects, Richardson was BGCA’s Senior Director of Sports, Fitness and Recreation. Richardson conceptualized and developed a multi-element health and fitness initiative, managed a national vision screening care program, the Nike sponsored P.L.A.Y Sports Program and for eight years the Alumni Hall of Fame annual awards ceremony.

Richardson lives in Atlanta, Georgia and is married to Ayoka Chenzira.

See how Timothy Lee Richardson is related to other HistoryMakers
Click Here To Explore The Archive Today!