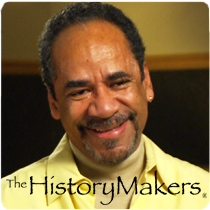 See how Tim Reid is related to other HistoryMakers
Donate Now

Actor, writer, producer and director Timothy L. Reid was born on December 19, 1944 in Norfolk, Virginia. As a teenager growing up in Norfolk, Reid dealt with the horrors of segregation during the height of the Civil Rights Movement in Virginia’s Tidewater area. In 1968, at the age of twenty-three, Reid received his B.A. degree in business administration from Norfolk State University.

After college, Reid moved to Chicago, taking a position as one of the first black marketing representatives with DuPont Corporation. That year, as part of the Junior Chamber of Commerce of Harvey, Illinois, Reid met Tom Dreesen, a white native of Chicago’s South Side. Devastated by the high rates of drug abuse and violence among Harvey’s teenagers, Dreesen and Reid developed an anti-drug program for students. After a presentation in 1969, an eighth-grade student told the duo she thought they were funny, and should become comedians. Receptive to the idea, the duo began to write comedic material, and formed Tim and Tom, arguably the first interracial comedic duo. Reid and Dreesen toured from 1971 to 1975, before disbanding to pursue other interests.

In 1976, Reid moved to Los Angeles, and picked up regular work on various television shows. He was subsequently cast on the Richard Pryor Show. Due to controversy and creative differences between NBC and the show’s namesake, the show was cancelled after only four episodes. A year later, however, Reid landed a spot on a hit show, playing DJ Gordon "Venus Flytrap" Sims on WKRP in Cincinnati. After the show was canceled in 1982, Reid joined the cast of another successful series, the detective drama Simon & Simon. In 1987, Reid earned critical acclaim as the co-creator, producer, writer and lead actor of Frank’s Place, a dramedy that involves the exploits of a college professor who inherits a New Orleans restaurant. Lasting twenty-two episodes, the show earned Reid several award nominations, winning an NAACP Image Award. Reid returned to television in 1993 with Sister, Sister, which starred twins Tia and Tamera Mowrey and actress Jackee Harry. Reid remained with the show for its entire six-year run. In 1995, Reid made his film directorial debut with the critically acclaimed feature film, Once Upon A Time...When We Were Colored.

In 1997, Reid co-founded New Millennium Studios with his wife, actress Daphne Maxwell Reid. In 2009, Reid established the Legacy Media Institute to train emerging filmmakers around the world. Reid has also remained active in the community, donating his time for various charitable activities.

See how Tim Reid is related to other HistoryMakers
Donate Now
Click Here To Explore The Archive Today!