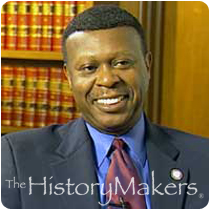 See how Thurbert Baker is related to other HistoryMakers
Donate Now

Born December 16, 1952, in Rocky Mount, North Carolina, Georgia Attorney General Thurbert Baker was raised by his mother, Mary H. Baker, on a small rural farm. He attended public elementary and high schools in Rocky Mount and, in 1975, received a B.A. in political science from the University of North Carolina at Chapel Hill. He graduated from Emory University School of Law in Atlanta in 1979.

From 1979 to 1985, Baker worked as a public defender before entering private practice. He was senior partner of the Baker and Shivers law firm from 1985 to 1997, during which time he won election to the Georgia House of Representatives, where he served from 1989 to 1997. He was named assistant floor leader for Governor Zell Miller in 1990 and floor leader in 1993.

Since 1997, Baker has served as the attorney general for the state of Georgia, the first African American to hold this position. Baker initiated the passage of legislation that increased penalties for domestic abuse cases, including a provision that made it a crime to commit an act of domestic violence in the presence of a child.

Baker serves on the executive committee of the National Association of Attorneys General (NAAG), is convenor of the NAAG Civil Rights Committee, and also served as chairman of NAAG's Conference on Violence Against Women. He is also an adviser to the Harrell Center for the study of domestic violence at the University of South Florida.

Baker has been a board member of the DeKalb County Library, the National Medical Society at Emory University, and the DeKalb College Foundation, and is a trustee of the Ebenezer Baptist Church. Baker, the 1975 Atlantic Coast Conference (ACC) individual sabre champion, was recognized in 2002 by the ACC as one of the top fencers in conference history when named to its fiftieth anniversary fencing team.

Baker and his wife, Catherine, live in Stone Mountain, Georgia. They have two daughters, Jocelyn and Chelsea.

See how Thurbert Baker is related to other HistoryMakers
Donate Now
Click Here To Explore The Archive Today!