Information about Thomas A. Parham 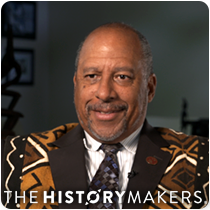 See how Thomas A. Parham is related to other HistoryMakers
Donate Now

College president and academic administrator Thomas A. Parham was born on October 2, 1954 in Queens, New York to William and Sadie Parham. In 1970, he graduated from Daniel Murphy High School, in Los Angeles, California. He went on to earn his B.A. degree in social ecology in 1977 from University of California Irvine, and his M.A. degree in counseling psychology in 1978 from Washington University in St. Louis, Missouri. In 1982, Parham received his Ph.D. degree in counseling psychology from Southern Illinois University, in Carbondale, Illinois.

Parham served as assistant professor at University of Pennsylvania in Philadelphia, from 1982 to 1985. He joined the faculty at the University of California Irvine in 1985 and held several positions over thirty-three years including: assistant vice chancellor for counseling and health services, counseling center director, career and life planning center director, and vice chancellor for student affairs. In 1986, he was appointed to the City of Irvine’s Human Relations Committee, and helped draft the city’s first human rights ordinance, which was passed by the city council. He also served as chair of UCI’s Martin Luther King Jr. Symposium for ten years. Parham was appointed the eleventh president of California State University Dominguez Hills in 2018.

Parham has served as a licensed psychologist for more than thirty-five years as a scholar and practitioner, with a research focus in the area of psychological negrescence, African psychology, and multicultural counseling. In addition to writing over forty-five journal articles and/or book chapters, he authored Psychological Storms: The African American Struggle for Identity in 1997 and Counseling Persons of African Descent: Raising the Bar of Practitioner Competence in 2002. He co-authored Culturally Adaptive Counseling Skills: Demonstrations of Evidence-Based Practices in 2011 and The Psychology of Blacks: Centering Our Perspectives in the African Consciousness in 2011.

He was the recipient of the 2018 Illustrious Leadership Award from the American Psychological Association’s Minority Fellowship Program.

Thomas A. Parham was interviewed by The HistoryMakers on December 14, 2018.

See how Thomas A. Parham is related to other HistoryMakers
Donate Now