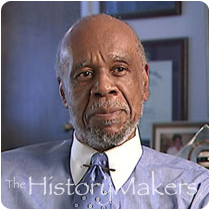 See how Thomas N. Todd is related to other HistoryMakers
Donate Now

Activist attorney widely known as "TNT" for his oratorical skills, Thomas N. Todd was born on September 24, 1938, in Demopolis, Alabama. His father died shortly thereafter, so his mother, and eventually a stepfather, raised Thomas in Mobile, Alabama. The family was poor, but Thomas, a large youth with a rich voice, nevertheless became a leader in school activities. He graduated early from Central High School in Mobile in 1955 and started that same year at Southern University at Baton Rouge, Louisiana.

A powerful spokesman for civil rights, Todd was president of the Chicago chapter of the Southern Christian Leadership Conference in 1971 and president of Operation PUSH from 1983 -1984. During the Harold Washington mayoral campaigns of 1983 and 1987, Todd's oratory was often used to "warm up" the crowd prior to Washington's arrival. Semi-retired and the recipient of over 500 awards and honorary degrees, Todd is one of the most electrifying commencement speakers on black college campuses. He and his wife, Janis, and two daughters live in Chicago.

See how Thomas N. Todd is related to other HistoryMakers
Donate Now
Click Here To Explore The Archive Today!