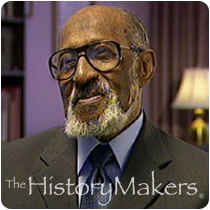 Favorite Color:
Blue
Favorite Food:
Turkey, Dressing
Favorite Time of Year:
Christmas
Favorite Vacation Spot:
Florida
Favorite Quote:
Do Unto Others As You Would Have Them Do Unto You.

Favorite Color:
Blue
Favorite Food:
Turkey, Dressing
Favorite Time of Year:
Christmas
Favorite Vacation Spot:
Florida
Favorite Quote:
Do Unto Others As You Would Have Them Do Unto You.

See how Thomas Miller is related to other HistoryMakers

Visual artist Thomas Miller was born in Bristol, Virginia, on December 24, 1920. Miller graduated from Douglas High School in Bristol in 1937 and went on to earn a B.S. from Virginia State College in 1947. Shortly thereafter, he enlisted in the U.S. Army and served in World War II.

Miller expressed interest in art when he was very young. He began drawing when he was just nine years old. However, it was not until he returned from the war and moved to Chicago that Miller formally studied art for the first time. He was the only black student enrolled at the Ray Vogue School of Art, where he received his degree in design in 1950. That same year, he was one of two African Americans accepted into the Society of Typographic Art. He worked briefly as a commercial artist for Gerstel/Loeff before joining Morton Goldsholl Associates, the internationally renowned design firm where he worked as a graphic designer for thirty-five years on projects like his 1970s redesign of the 7-Up packaging and identity.

In addition to commercial design work, Miller has enjoyed a successful career as an independent visual artist. While stationed abroad during World War II, he sold oil paintings in England, France and Belgium. He is particularly known for employing a technique known as monotype, a subtractive process in which pigment is removed from paint-coated glass.

More recently, Miller has focused his efforts on creating mosaic portraits. In 1995, as the honoree for the 21st Annual Arts & Crafts Promenade in Chicago, Miller's mosaic portraits of the DuSable Museum's eight founders were permanently installed in the museum's lobby. Miller's portrait of Chicago's late mayor Harold Washington is also in the DuSable Museum's permanent collection.

Though he no longer conducts gallery shows, Miller continues to paint, draw and create in various media. Miller has received numerous industry awards and much recognition for his achievements in the field of graphic design. He and his wife, Anita, have three children and reside in Chicago's Beverly community.

See how Thomas Miller is related to other HistoryMakers
Click Here To Explore The Archive Today!