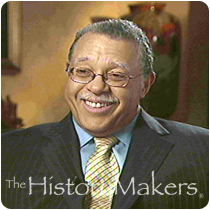 See how Thomas L. McLeary is related to other HistoryMakers
Donate Now

Insurance executive, Chartered Life Underwriter and CEO of Endow, Incorporated, Thomas Livingston McLeary was born on September 8, 1944 in Chicago, Illinois. His mother, Edna Tubbs McLeary and all of her sisters were graduates of Rust College and his father, Thomas Jefferson McLeary, operated a dry cleaners. McLeary attended Doolittle Elementary School and graduated from Englewood High School in 1961.With the help of youth minister Clyde Miller, McLeary received an Illinois General Assembly scholarship, and earned his B.A. degree in psychology from the University of Illinois in 1965.

After graduation, McLeary joined the National Guard and enrolled in Prudential Insurance Company’s Management Training Program. McLeary began to appreciate the insurance business as he worked in the Chicago home office from 1965 to 1970. From 1970 to 1977, McLeary moved into Prudential Insurance’s Chicago Hyde Park office ins sales. Under the guidance of John Lassiter, a member of Operation Push, McLeary won the Prudential’s Agent of the Year Award in 1975 and a President’s Citation. McLeary, a Huebner Scholar attended American College and soon qualified as a Chartered Life Underwriter (CLU). In 1978, McLeary co-founded Endow, Incorporated as a multi-line insurance company dealing with public entities, small and large corporations and individuals of large net worth. In 1992, he formed with three others, Premier Network Service Group, the first national African American property and casualty and financial services firm.

McLeary is a past president of the Chicago Association of Life Underwriters and the Illinois Association of Life Underwriters (IALU). In 1987, McLeary was awarded the IALU’s Distinguished Service Award. A longtime member of the National Minority Business Development Council, McLeary is a member of ABLE and has also been a member of Chicago’s Million Dollar Round Table for twenty-four years. McLeary is active on numerous boards and civic committees. He also enjoys working with his wife on various projects to encourage and support young people.

McLeary was interviewed by The HistoryMakers on December 10, 2006.

See how Thomas L. McLeary is related to other HistoryMakers
Donate Now
Click Here To Explore The Archive Today!