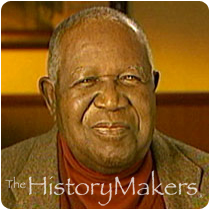 See how Thomas Fleming is related to other HistoryMakers
Donate Now

Thomas C. Fleming is the oldest and longest-serving black journalist in the country. Born in Jacksonville, Florida, in 1907, he lived in Harlem for a short time before relocating to Chico, California, in 1919.

After graduating from Chico High School in 1926, Fleming worked as a bellhop and later as a cook for the Southern Pacific Railroad. In the early 1930s, he began working as an unpaid writer for the Spokesman, a progressive black paper in San Francisco. In 1932, he began coursework in political science at Chico State College, completing just three semesters before returning to the San Francisco Bay Area. In 1944, he became the founding editor of the Reporter, the only black paper in San Francisco at the time. He stayed on as the editor when it later merged with another black paper, the Sun, to become the Sun-Reporter. Since then, Fleming has been writing consistently, covering civil rights issues and giving an editorial voice to the Bay Area's black communities. In July of 1997, Fleming retired as executive editor of the Sun-Reporter. However, he continues to write two articles a week for the paper, as well as his syndicated column, "Reflections on Black History." The column is posted on the Internet and sent to more than 200 African American newspapers nationwide.

On his 90th birthday in 1997, Fleming published a collection of stories and photos from his early boyhood in Jacksonville and Harlem. The following year, he published Black Life in the Sacramento Valley 1850-1934, co-authored by Michele Shover, a professor of political science at California State University, Chico. Throughout his long-spanning career, he has come into contact with such greats as Martin Luther King, Jr., W.E.B. Du Bois, Charles Houston, A. Philip Randolph, Mary McLeod Bethune, Duke Ellington, Thurgood Marshall, Malcolm X, Langston Hughes and Paul Robeson. Thomas Fleming is the 1997 winner of the Career Achievement Award for Print from the Northern California Chapter of the Society of Professional Journalists.

See how Thomas Fleming is related to other HistoryMakers
Donate Now
Click Here To Explore The Archive Today!