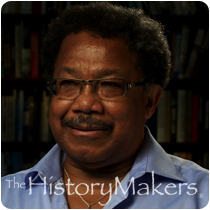 Favorite Color:
Blue
Favorite Food:
Steak
Favorite Time of Year:
Fall
Favorite Vacation Spot:
Normandy, France
Favorite Quote:
Those Who Expect To Get Change Without Struggle Are Like Those That Expect Crops Without The Rain.

Favorite Color:
Blue
Favorite Food:
Steak
Favorite Time of Year:
Fall
Favorite Vacation Spot:
Normandy, France
Favorite Quote:
Those Who Expect To Get Change Without Struggle Are Like Those That Expect Crops Without The Rain.

See how Thomas C. Holt is related to other HistoryMakers

Historian and scholar Thomas C. Holt was born on November 30, 1942 in Virginia. Holt attended and graduated from segregated schools in southside Virginia. He went to work for the SNCC during the Civil Rights Movement in his hometown, Danville, and in Cambridge, Maryland in 1965. He graduated from Howard University with his B.A. degree in 1965 and his M.A. degree 1966. Following that, Holt worked for a federal antipoverty programs trying to change the living and working conditions of migrant and seasonal farm workers until 1968. Holt began his teaching career at Howard University in 1972 and in 1973, he received his Ph.D. from Yale University.

Holt taught at Howard University, Harvard University, the University of Michigan, Ann Arbor, and the University of California, Berkley before becoming a professor at the University of Chicago in 1988. Holt is the University of Chicago's James Westfall Thompson Professor of American and African-American History. Over the course of his career, Holt has published the following books: Black Over White: Negro Political Leadership in South Carolina during Reconstruction (1979), The Problem of Freedom: Race, Labor, and Politics in Jamaica and Britain, 1832-1938 (1992), and The Problem of Race in the 21st Century (2000). Holt also co-wrote Beyond Slavery: Explorations of Race, Labor, and Citizenship in Post-emancipation Societies (2000) with Rebecca J. Scott and Frederick Cooper.

In 1978, the Southern Historical Association awarded Holt the Charles S. Sydnor Prize for his work on racial politics in the post- emancipation American South in Black Over White: Negro Political Leadership in South Carolina during Reconstruction. Holt also received the Elsa Goveia Prize from the Association of Caribbean Historians for the same book. In 1987, Holt received the Presidential Initiatives Award from the University of Michigan under President Harold Shapiro. In 1990, Holt received the John D. and Catherine T. MacArthur "Genius Grant." President Clinton appointed Holt to the Council of the National Endowment for the Humanities from 1994 to 1997. Holt worked as a fellow in the Center for Advanced Study in the Behavioral Sciences at Stanford University. In 2003, Holt was elected to be a fellow of the American Academy of Arts and Sciences.

Thomas C. Holt was interviewed by The HistoryMakers on May 27, 2010.

See how Thomas C. Holt is related to other HistoryMakers
Click Here To Explore The Archive Today!