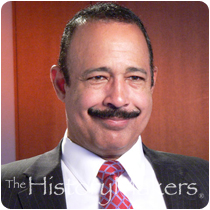 See how Theodore V. Wells, Jr. is related to other HistoryMakers

Attorney Theodore V. Wells, Jr. has made a mark on the legal world as one of the most sought-after white collar criminal lawyers. Ted Wells was born Theodore Von Wells, Jr. on April 28, 1950 in Washington, D.C. to Phyllis and Theodore V. Wells, Sr., and grew up in a small rowhouse in Northwest, Washington, D.C. Wells was raised by his mother, who worked in the U.S. Navy’s mailroom. Wells became known for his academic focus, and by the time he attended Calvin Coolidge High School was known for his grades as well as his prowess on the football field.

In 1968, Wells graduated from Calvin Coolidge High School and attended the College of the Holy Cross in Worcester, Massachusetts. While attending Holy Cross, Wells was mentored by Reverend John E. Brooks and Edward Bennett Williams and became head of the black student union. One classmate, also a member of the union, was current U.S. Supreme Court Justice Clarence Thomas, with whom Wells participated in a walkout because of the school’s racially motivated unfair practices. In 1971, Wells married his high school girlfriend, Nina Mitchell, in Washington, D.C. The following year, he returned to school and received his B.A. degree.

After graduation, Wells attended Harvard Law School and Harvard Business School simultaneously, receiving both his J.D. and M.B.A. degrees in 1976. Wells was one of only forty-three black students then enrolled in Harvard Law School. He then worked as a law clerk for Judge John J. Gibbons, a Third Circuit judge, where he worked alongside another current Supreme Court Justice, Samuel Alito. The following year, after a very brief clerkship at Paul, Hastings, Janofsky & Walker in Los Angeles, Wells joined the Lowenstein Sandler law firm in New Jersey and worked doing pro bono criminal defense work under mentor Matthew Boylan. There, he would hone his trial room technique.

In 1982, Wells became partner at Lowenstein Sandler. The following year, he won his case for Hudson County Prosecutor Harold Ruvoldt, then on trial for bribery and extortion and in 1987 successfully defended Raymond Donovan, the U.S. Secretary of Labor, his first high profile case. In 1993, Wells was elected Fellow for the American College of Trial Lawyers, and, in 1994, he was chosen as one of the most influential lawyers in America by the National Law Journal, a title he earned again in 1997 and 2000.

In 1998, Wells won a case for U.S. Secretary of Agriculture Michael Espy in U.S. v. Espy, and the following year, Wells effectively defended Franklin L. Haney, a Tennessee financier who had become involved in a campaign finance controversy for the 1996 presidential elections. In 2000, Wells became Bill Bradley’s National Campaign Treasurer during his unsuccessful presidential run. That year, he also joined Paul, Weiss, Rifkind, Wharton & Garrison, becoming partner and litigation department co-chair. Since then, Wells has defended a number of major corporations in a variety of cases, and his clients have included Johnson & Johnson, Mitsubishi Corporation, Philip Morris, ExxonMobil and the Carnival Corporation, as well as the first RICO case on Wall Street. Most recently, Wells defended Dick Cheney’s former chief of staff “Scooter” Libby in the Valerie Plame CIA leak scandal.

Wells was interviewed by The HistoryMakers on May 15, 2007.

See how Theodore V. Wells, Jr. is related to other HistoryMakers
Click Here To Explore The Archive Today!