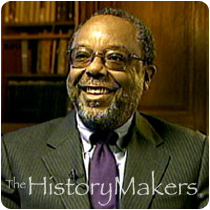 See how Theodore C. Landsmark is related to other HistoryMakers

The subject of a famous 1977 Pulitzer Prize-winning photograph that showed him being attacked by a man with an American flag on the steps of Boston's Government Center, Ted Landsmark was born in Kansas City, Missouri, on May 17, 1946. His family moved to East Harlem in New York by the time he started school. After attending Stuyvesant High School and St. Paul's Preparatory, Landsmark went on to Yale University, where he earned a B.A. in political science in 1969. He then earned professional degrees from Yale Law School and Yale School of Architecture. Years later, Landsmark completed his Ph.D. at Boston University.

Landsmark has worked as the dean of graduate and continuing education at the Massachusetts College of Art. He also served as the director of Boston's Office of Community Partnerships. Landsmark is currently the president and CEO of the Boston Architectural Center, a school offering degrees in architecture and interior design and one of the only schools in the country fully staffed by individuals practicing in the areas they teach.

A passionate student of eighteenth- and nineteenth-century African American art, Landsmark has spoken extensively on the subject. He has received fellowships from the Museum of Early Southern Decorative Arts and the National Science Foundation, and he serves on the editorial board for Architecture Boston. Landsmark also serves as a trustee to numerous arts related foundations including Boston's Institute of Contemporary Art and the Museum of Fine Arts in Boston.

See how Theodore C. Landsmark is related to other HistoryMakers
Click Here To Explore The Archive Today!