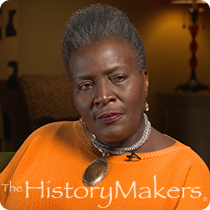 See how Thelma Sias is related to other HistoryMakers
Donate Now

Corporate executive Thelma Sias was born on June 19, 1953 in Mayersville, Mississippi to Pauline Carter Sias and Theodore Roosevelt Sias. She attended Rolling Fork High School in Rolling Fork, Mississippi and received a scholarship to attend Clark Atlanta University in Atlanta Georgia where she received her B.A. degree in 1976.

After graduation, Sias was recruited by the University of Wisconsin, Green Bay in Green Bay, Wisconsin to recruit African American and minority students at the Ethnic Heritage Recruitment Center on campus. In 1982, she moved to Milwaukee, Wisconsin and worked for alderman Roy B. Nabors, one of few African American alderman on the Common Council. In 1986, Sias was hired as a supervisor for community outreach for the Wisconsin Gas Company, now known as Wisconsin Energy. She was promoted to manager and then became director of community outreach when the gas and electric companies merged. In 2003, Sias was promoted to vice president of local affairs and served on the board of the We Energies Foundation. In 2017, Sias retired from her position at We Energy, after thirty-one years with the company.

Sias served as a 2014 community campaign co-chair for the United Way of Greater Milwaukee prior to the organization's merger with the United Way in Waukesha County. She was named to Savoy magazine’s 2016 list of Top Influential Women in Corporate America and was honored by the Milwaukee Urban League which established the Thelma A. Sias Fellows of Distinction Award. In 2017, she was honored by the Greater Milwaukee Foundation as the Doug Jansson Leadership Award honoree and a Civic Leaders Award honoree by the Milwaukee Fellowship Open. Sias was the Milwaukee Business Journal’s 2015 40 under 40 Hall of Fame honoree.

Thelma Sias was interviewed by The HistoryMakers on February 21, 2017.

See how Thelma Sias is related to other HistoryMakers
Donate Now