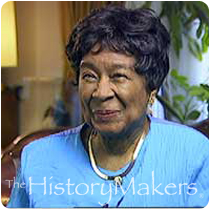 Favorite Color:
Sky Blue
Favorite Food:
Chicken, Spinach
Favorite Time of Year:
Spring
Favorite Vacation Spot:
Canada
Favorite Quote:
Give To The World The Best That You Have And The Best Will Come Back To You.

Favorite Color:
Sky Blue
Favorite Food:
Chicken, Spinach
Favorite Time of Year:
Spring
Favorite Vacation Spot:
Canada
Favorite Quote:
Give To The World The Best That You Have And The Best Will Come Back To You.

See how Thelma Groomes is related to other HistoryMakers

Thelma Lucille Jarmon Vass Groomes was born January 3, 1911, in Kinston, North Carolina. An only child, her father worked as a truck driver and a preacher while her mother was a seamstress and beautician. Groomes grew up in Washington, D.C., graduating from high school in 1928 and going on to attend Howard University, where she earned a B.A. in education in 1932. She would later return to school at the University of the District of Columbia to further her education in the 1960s.

After graduating from Howard, Groomes took a job with the U.S. Department of Commerce, tabulating figures for the next three years. In 1935, she left for the U.S. Department of Labor to work as a statistical clerk, and she would remain there until 1959. That year, she went to work at Hine Junior High School teaching English, reading and social studies. She also taught government and sociology at Roosevelt High School as part of its adult education program. While at Hine, Groomes was an outgoing teacher engaged in her students' progress. She was the sponsor of the United Nations Contest and trip to the United Nations in New York, the sponsor of the Junior Red Cross Society and sponsor of the Charm and Culture Club. She also served as a representative of the school to the city of Washington, D.C., and the National Education Association. Groomes retired in 1972, but spent the next year working as a consultant to Alton Elementary School in the Parent-Partnership Traineeship Program.

Over the years, Groomes has been involved in a wide number of organizations. She has served as the vice president of the Association for the Study of African American Life and History in the Capital chapter, served on the Women's Committee of the Kennedy Center for the Performing Arts and is a charter member and vice president of the D.C. Friends of Liberia. She also currently serves as the president of the Howard University Women's Club, a role that she also filled from 1954 to 1956. She is also a lifelong member of the National Education Association and the NAACP. Groomes has been named the Woman of the Year by Afro-American, has been inducted into the Washington Urban League Hall of Fame, and was named One of Washington's Best Dressed Women by the Omega Wives. Groomes has traveled the world and sponsored three overseas orphans. She has two children, two grandchildren and three great-grandchildren.

See how Thelma Groomes is related to other HistoryMakers
Click Here To Explore The Archive Today!