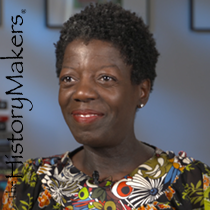 See how Thelma Golden is related to other HistoryMakers

Museum director and curator Thelma Golden was born on September 22, 1965 in Queens, New York. In 1983, she graduated from the New Lincoln School, where she trained as a curatorial apprentice at the Metropolitan Museum of Art in her senior year. In 1987, she earned her B.A. degree in art history and African American studies from Smith College.

Golden worked first as a curatorial intern at the Studio Museum in Harlem in 1987, then as a curatorial assistant at the Whitney Museum of American Art in 1988. From 1989 to 1991, she worked as the visual arts director for the Jamaica Arts Center in Queens, New York, where she curated eight shows. Golden was then appointed branch director of the Whitney Museum of American Art’s Philip Morris branch in 1991 and curator of the Whitney Museum of American Art in 1996. While at the Whitney, she organized numerous groundbreaking exhibitions, including the 1993 Whitney Biennial and 1994’s Black Male: Representations of Masculinity in Contemporary American Art. She also organized Bob Thompson: A Retrospective (1998), Heart, Mind, Body, Soul: New Work from the Collection (1998), and Hindsight: Recent Work from the Permanent Collection (1999). Golden also presented projects by artists Alison Saar, Glenn Ligon, Gary Simmons, Romare Bearden, Matthew McCaslin, Suzanne McClelland, Lorna Simpson, Jacob Lawrence, and Leone & MacDonald. She also worked as the special projects curator for contemporary art collectors Peter Norton and Eileen Harris Norton from 1998 to 2000. Golden returned to the Studio Museum in Harlem in 2000, where she was named deputy director for exhibitions and programs, and director and chief curator in 2005. Golden organized numerous exhibitions at the Studio Museum, including Isaac Julien: Vagabondia (2000); Martin Puryear: The Cane Project (2000); Glenn Ligon: Stranger (2001); Freestyle (2001); Black Romantic: The Figurative Impulse in Contemporary Art (2002); harlemworld: Metropolis as Metaphor (2004); Chris Ofili: Afro Muses (2005); Frequency (2005–2006); Africa Comics (2006–2007); and Kori Newkirk: 1997–2007 (2007–2008). Golden also lectured at several institutions, including Columbia University, Yale University, and the Royal College of Art in London. In addition, she contributed essays about Lorna Simpson, Carrie Mae Weems, Bill T. Jones, Kara Walker, and Glenn Ligon to various publications.

Golden received honorary degrees from Moore College of Art and Design, Smith College, and the San Francisco Art Institute. In 2008, she was a member of the advisory team of the Whitney Biennial; and in 2007, a juror for the UK Turner Prize. Golden served on the graduate committee for Bard College’s Center for Curatorial Studies, and on the boards of Creative Time in New York and the Institute of International Visual Arts in London. In 2016, she was awarded the Audrey Irmas Award for Curatorial Excellence.

Thelma Golden was interviewed by The HistoryMakers on August 9, 2016.

See how Thelma Golden is related to other HistoryMakers
Click Here To Explore The Archive Today!