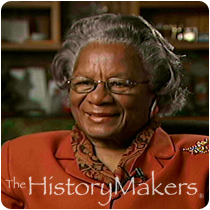 See how Thelma Gibson is related to other HistoryMakers
Donate Now

Thelma Vernell Anderson Gibson was born on December 17, 1926 in Coconut Grove, Florida. She was the sixth of fourteen children born to Sweetlon Counts Albury Anderson and Thomas Theodore Anderson. At that time, Coconut Grove was divided into “Colored Town” and “White Town”. Gibson lived in “Colored Town,” and her parents’ house on Charles Street had no electricity or running water. Gibson graduated in February of 1944 from George Washington Carver High School.

Gibson attended Saint Agnes School of Nursing at Saint Augustine’s College in Raleigh, North Carolina. In August of 1947, she became a registered nurse specializing in operating techniques. Gibson worked in the “Colored Wards” of Jackson Memorial Hospital. Before continuing her education under the tutelage of Dr. Mary Carnegie at Florida A&M University and between 1954 and 1955, Gibson attended Washington, D.C.’s Catholic University. In 1956, she attended the University of North Carolina at Chapel Hill, where she studied cancer and communicable diseases. Gibson attended the University of Miami from 1957 to 1958 and earned her B.S. degree in nursing education in 1959, after one year of study at the Teachers College at Columbia University in New York.

Gibson has worked in a variety of health organizations including the E.J. Hall Clinic in Miami, Florida; the Gallinger Memorial Hospital in Washington, D.C.; the Dade County Health Department; and the Riverside Hospital for Teenaged Drug Addicts. She also served as Nursing Supervisor and Part-time Social Worker for Mount Sinai Hospital from 1967 until 1980. In August, 1997, Gibson was appointed Miami’s interim City Commissioner. In 1984, she founded the Women’s Chamber of Commerce of Dade County.

Gibson has received many honors and awards, including a membership as Founder of the Jewish Home for the Aged, the Reverend Dr. Martin Luther King Drum Major for Justice Award, the Jewish Home and Hospital Women’s Auxiliary Sacred Heart Award, and the Jackson Memorial Hospital Image Committee Award, among others. She is also President of the Theodore Roosevelt Gibson Memorial Fund, Inc.; a Trustee at the University of Miami; a Life Member of the NAACP; and she serves on the board for the Coconut Grove Cares Mental Health Association. She sponsored the Gibson Health Initiative, which provides testing and assistance for HIV/AIDS. In the fall of 2000, she published her autobiography, Forbearance, Thelma Vernell Anderson Gibson, the Life of a Coconut Grove Native. She also helped form the Theodore and Thelma School of the Performing Arts in Coconut Grove, named after herself and her late husband, the late Reverend Canon Theodore Roosevelt Gibson.

See how Thelma Gibson is related to other HistoryMakers
Donate Now
Click Here To Explore The Archive Today!