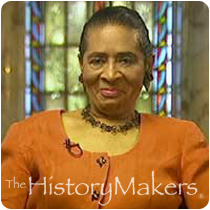 See how Thelma Daley is related to other HistoryMakers
Donate Now

Thelma Daley was born on June 17th, in Annapolis, Maryland. Attending Bowie State University in Maryland, Daley graduated at the age of nineteen with her B.S. degree. She went on to New York University, earning her M.A. in counseling and personnel administration. More recently, she has received her Ed.D. in counseling from George Washington University.

Daley began her career at the Baltimore County Board of Education, serving as the coordinator for guidance and counseling services. She has also served as a visiting professor at North Central Western Maryland College, the University of Wisconsin and Harvard University. Daley has been active with a wide number of organizations over the years, beginning with her sorority, Delta Sigma Theta. She served as the national treasurer from 1963 to 1967. Daley became national vice president in 1971, and in 1975 she became national president, holding the position for four years. Daley also served as the national president of the American School Counseling Association from 1971 to 1972 and as president of the American Personnel & Guidance Association from 1975 to 1976. She has been active with the United Negro College Fund. Daley is also the national director of WIN, the Women in the NAACP. Currently, Daley and WIN promote knowledge of Sudden Infant Death Syndrome and AIDS prevention within the African American community.

By presidential appointment, Daley became the first woman to chair the National Advisory Council on Career Education. She has appeared in Who's Who Among Black Americans and has served on the board of directors of the National Testing Service. Daley and her husband, Guilbert, live in Maryland.

See how Thelma Daley is related to other HistoryMakers
Donate Now
Click Here To Explore The Archive Today!