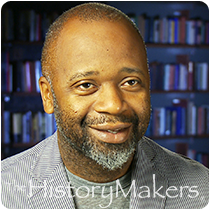 See how Theaster Gates is related to other HistoryMakers

Visual artist and urban planner Theaster Gates was born in Chicago, Illinois in 1973. He was raised in Chicago’s East Garfield Park, where he sang in his church choir and helped with his father's roofing business. Gates graduated from Lane Technical College Preparatory High School and went on to receive his B.S. degree in urban planning from Iowa State University in 1996. He later obtained his M.A. degree in fine arts and religious studies from the University of Cape Town in 1998 and his M.S. degree in urban planning, ceramics and religious studies from Iowa State University in 2006.

In 2000, Gates was hired as an arts planner for the Chicago Transit Authority. He then went on to work at the Little Black Pearl Art and Design Center as director of education and outreach. Beginning in 2006, Gates purchased a small number of abandoned homes on Chicago’s South Side in the Greater Grand Crossing neighborhood. He restored the structures using repurposed materials and turned them into alternative cultural spaces, which he collectively called Dorchester Projects. Gates then founded the non-profit Rebuild Foundation to program the spaces.

In 2007, Gates was hired as a coordinator of arts programming for the University of Chicago’s Humanities Division. In 2009, he became an artist in residence and lecturer in the Department of Visual Arts and was appointed as the director of arts program development for the University of Chicago; in 2011, he was named the director of the Arts and Public Life initiative. In 2014, Gates was appointed as a professor in the Department of Visual Arts.

As an artist, Gates is represented by White Cube of London, England. Gates has exhibited his artwork and performed at the Studio Museum in Harlem, New York; Whitechapel Gallery, London; Punta della Dogana, Venice; the Museum of Contemporary Art, Chicago; the Whitney Museum of American Art, New York; the Milwaukee Art Museum; the Santa Barbara Museum of Art; and Documenta 13, Kassel, Germany; among others.

Gates has received awards and grants from the Knight Foundation, Anderson Ranch, Creative Time, the Wall Street Journal, the Vera List Center for Art and Politics, Creative Capital, the Joyce Foundation, the Graham Foundation, the Bemis Center for Contemporary Arts, and Artadia. In 2010, Gates served as a Loeb fellow at Harvard University’s Graduate School of Design; in 2012, he became a fellow of United States Artists. In 2013, ArtReview ranked Gates fortieth on its list of the hundred most powerful people in the art world.

Theaster Gates was interviewed by The HistoryMakers on August 4, 2014.

See how Theaster Gates is related to other HistoryMakers
Click Here To Explore The Archive Today!