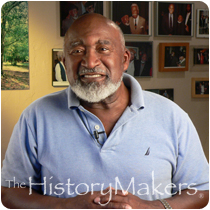 See how Thaddeus Mosley is related to other HistoryMakers

Sculptor Thaddeus Gilmore Mosley was born on July 23, 1926 in New Castle, Pennsylvania. After graduating from high school, he enrolled in the U.S. Navy. Mosley graduated from the University of Pittsburgh with a double major in English and journalism in 1950.

Mosley began working for the U.S. Postal Service. During the 1950s, while at the Postal Service, Mosley began writing freelance for The Pittsburgh Courier and for several other national publications. At this time, he also began making sculptures. In 1968, he had his first solo exhibit at the Carnegie Museum of Art. He credits sculptors Constantin Bruncusi and Isamu Noguchi as his earliest influences. His commissions include, Three Rivers bench in 2003 for the David L. Lawrence Convention Center; Legends at the Susquehanna Museum; and an exhibition at the Cue Art Foundation Gallery. His most famous sculptures are the 14’ cedar Phoenix located at the corner of Centre Avenue and Dinwiddie in Pittsburgh’s Hill District and the “Mountaintop” Limestone at the Martin Luther King, Jr. Library in the Hill District at Herron and Milwaukee Streets.

Mosley wrote Thaddeus Mosley: African-American Sculptor with a narrative by David Lewis that was published by the Carnegie Museum of Art in 1997.

Mosley was named the Artist of the Year and was awarded the Governor’s Award, the Cultural Award, and the Service in the Arts Award by the Pittsburgh Center of the Arts. Mosley has been an officer for the Pittsburgh Society of Sculptors and a board member of the August Wilson Center for African American Culture.

Mosley was interviewed by The HistoryMakers on August 11, 2008.

See how Thaddeus Mosley is related to other HistoryMakers
Click Here To Explore The Archive Today!