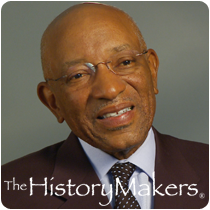 See how Terry Jones is related to other HistoryMakers
Donate Now

Founder of Syncom, Inc., Terry L. Jones graduated from Trinity College in Hartford, Connecticut with his B.S. degree in Electrical Engineering. At Trinity, Jones founded the school’s first black student organization. Upon completing college, Jones worked as an electrical engineer for Westinghouse Aerospace and Litton Industries. He later returned to school where he earned his M.S. degree in computer science and biomedical engineering from George Washington University. In 1972, Jones obtained his M.B.A from Harvard Graduate School of Business Administration and became the co-founder and vice president of Kiambere Savings and Loan in Nairobi, Kenya. During his time in Nairobi Kenya he served as lecturer at the University of Nairobi. In 1977, he returned to the United States to join Syncom Inc. as Vice President.

Jones has served as a member of the board of Directors for a number of Syncom Portfolio companies and other corporations such as Weather Decisions Inc., V-me Media, Delta Capital Corporation and the Southern African Enterprise Development Fund. He has also served on the board of directors for Federal Home Loan Mortgage Corporation, Phillip Morris Companies, Inc. and the Howard University Entrepreneurial Leadership and Innovation Institute. He has joined the board of trustees for Cornell University and Spelman College. He is the recipient of the New America Alliance Award of Excellence.

See how Terry Jones is related to other HistoryMakers
Donate Now
Click Here To Explore The Archive Today!