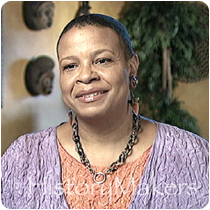 See how Terrie Williams is related to other HistoryMakers
Donate Now

Author and public relations entrepreneur Terrie Williams was born in Mt. Vernon, New York, on May 12, 1954. Williams attended Pennington Grade School, where one of her fellow classmates was actor Denzel Washington, and graduated in three years from Mt. Vernon High School in 1971. Williams attended Brandeis University following high school, earning her B.S. degree in psychology in 1975, and then attended Columbia University, where she earned her master’s degree in social work.

After working for a number of years as a social worker, Williams founded the Terrie Williams Agency in 1988, after meeting Miles Davis in the hospital. Williams began representing Davis, and her next big client, Eddie Murphy; since that time, she has gone on to represent superstars such as Janet Jackson, Russell Simmons, Johnnie Cochran, Stephen King, and Sally Jesse Raphael, as well as organizations such as HBO and Essence Communications. The Terrie Williams Agency went on to become a division of PGP Communications, where Williams served as vice chair.

Williams authored three books: The Personal Touch: What You Really Need to Succeed in Today’s Fast-paced Business World, Stay Strong: Simple Life Lessons for Teens and A Plentiful Harvest: Creating Balance and Harmony Through the Seven Living Virtues. Stay Strong has been used nationwide in schools, and was the catalyst for launching the Stay Strong Foundation, a nationwide non-profit organization for youth.

Williams was a highly sought-after speaker, speaking at engagements with Fortune 500 companies, universities, and numerous other organizations. Williams is the recipient of several awards, including being the first African American to win the New York Women in Communications Matrix Award, and the Citizen’s Committee for the New York Marietta Tree Award for Public Service.

In 1998, Williams donated her papers to the Moorland-Spingarn Research Center at Howard University, making them the first gift of papers donated in the public relations field.

See how Terrie Williams is related to other HistoryMakers
Donate Now
Click Here To Explore The Archive Today!