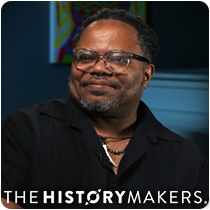 See how Terrence Spivey is related to other HistoryMakers

Artistic director Terrence Spivey was born on June 10, 1961 in Kountze, Texas to Lillian Cole and Terry Cooper. He graduated from Lamar High School in 1979, and went on to receive his B.A. degree in theater from Prairie View A&M University in 1984. He then moved to New York City, where he studied the Meisner technique at William Esper Studio in 1988.

Spivey worked as an actor and theater director throughout the 1990s. From 2000 to 2001, Spivey served as theater workshop facilitator at the Black Writers Reunion and Conference. In 2002, Spivey became the associate director for legendary playwright J.e. Franklin of the Black Girl Ensemble in Harlem, New York; and, in 2003, he was hired as the artistic director of the historical Karamu House. While there, he directed productions of The Little Tommy Parker Celebrated Minstrel Show, Bee-Luther-Hatchee, Dream on Monkey Mountain, God’s Trombone and The Wiz. In 2008, Spivey joined Kent State University’s theatre and dance department as an adjunct professor, becoming the theatre director in residence for productions by Kent State University’s Pan African Studies department in 2013. Spivey was selected as the keynote speaker for the United States Institute for Theatre Technology’s fifty-fifth annual conference in 2015. In 2016, Spivey left the Karamu House, and began working as a freelance director, acting instructor, theater lecturer and career consultant, and speech coach. With the Powerful Long Ladder Ensemble Theater Company in Cleveland, Ohio, Spivey debuted productions of James Baldwin’s The Amen Corner. He also directed productions of, The Bloodless Jungle; Radio Golf; Breath, Boom; Bootycandy; and Neighboors. In 2016, he directed Objectively/Reasonable: A Community Response to the Shooting of Tamir Rice, which received national acclaim and was featured on NPR’s Going There with Michel Martin. In 2017, Spivey worked as an artistic associate with the Shore Culture Center in Eucid, Ohio, and served as an artist-in-residence at the Cleveland School of the Arts. In 2018, Spivey founded TamiReach, to establish the theatre program at the Tamir Rice Afrocentric Cultural Center.

Spivey has served on the board of the Community Partnership for Arts and Culture, the Cleveland Arts Prize, AUDELCO and the Cleveland Foundation’s Rock and Roll Hall of Fame scholarship committee. In 2011, Spivey received a proclamation from Cleveland Mayor Frank Jackson and Councilwoman Mamie Mitchell for his local, regional and national artistic contributions. Spivey also received the 2013 AUDELCO Award for Repertory Company of the Year for his work with the Karamu House. In 2016, he was honored by state representative John Barnes, Jr. for his contributions to the arts. In 2017, he received the Best Bold Direction for a Shocking Piece Award for his premiere of Neighbors by Brandon Jacobs-Jenkins. In the same year, Spivey was voted Best Director by The Cleveland Scene.

Terrence Spivey was interviewed by The HistoryMakers on September 27, 2018.

See how Terrence Spivey is related to other HistoryMakers