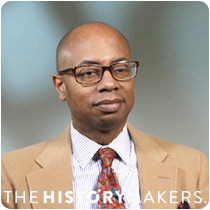 Favorite Color:
Blue
Favorite Food:
Pizza and Ethiopian
Favorite Time of Year:
Spring
Favorite Vacation Spot:
Paris
Favorite Quote:
What Things Can You Do On A Day To Day Basis To Bend The Arc Of History Towards Justice.

Favorite Color:
Blue
Favorite Food:
Pizza and Ethiopian
Favorite Time of Year:
Spring
Favorite Vacation Spot:
Paris
Favorite Quote:
What Things Can You Do On A Day To Day Basis To Bend The Arc Of History Towards Justice.

See how Terrence M. Franklin is related to other HistoryMakers
Donate Now

Lawyer Terrence M. Franklin was born on September 29, 1963 in Chicago, Illinois. He graduated from Whitney M. Young Magnet High School in Chicago, and received his B.S. degree in 1984 from Northwestern University in Evanston, Illinois. In 1989, Franklin graduated with a J.D. degree from Harvard Law School in Cambridge, Massachusetts.

Upon his graduation from law school, Franklin went to work in general litigation with the Los Angeles law firm of Morrison & Foerster. He then joined Ross, Sacks & Glazier, LLP, rising to partner, handling trust and estates and probate litigation, disputes and appeals. In 2001, he was a founding partner in Sacks, Glazier, Franklin & Lodise, LLP. Franklin was credited for successfully published appeals including the landmark Moeller case, Moeller v. Superior Court (Sanwa Bank) in 1997.

An active member of the trusts and estates legal community, he is chair of the Diversity and Inclusivity Committee of the American College of Trust and Estate Counsel (ACTEC), where he has worked to improve the membership of diverse and minority lawyers. He was instrumental in developing a diversity and inclusivity mission statement for ACTEC, and established a fellowship to support potential future fellows in the college. In addition, Franklin serves on the Board of Regents of ACTEC, the California Membership Committee, and the Fiduciary Litigation Committee. Franklin served as a member of the Diversity Committee of the American Bar Association (ABA) Real Property, Trust and Estate Section; Council Member and Supervisory Council Member for the Litigation, Ethics and Malpractice Group; Vice Chair of the Practice Group Management; and Chair of the Ethics and Malpractice Committee.

Franklin has been frequently called upon as a speaker to national, state and local estate planning, trust, and probate groups, such as ACTEC, ABA Real Property Trust and Estate Law Section, and the University of Southern California Gould School of Law Probate and Trust Conference, where he was also a long-standing Planning Committee member, and rose to conference chair.

Franklin was ranked by Chambers and Partners High Net Worth guide in the Private Wealth Law category for 2017. He has been named to the list of Southern California Super Lawyers every year since 2005, and included on the list of the Best Lawyers in America every year since 2011. Franklin was also named Best Lawyers "Lawyer of the Year" in 2016 for Trusts & Estates Litigation-Los Angeles. In 2014, Franklin discovered the will that freed his ancestors from slavery and his mission is to share that story.

Terrence M. Franklin was interviewed by The HistoryMakers on February 26, 2018.

See how Terrence M. Franklin is related to other HistoryMakers
Donate Now