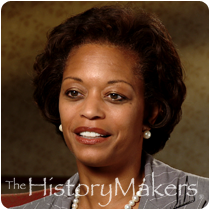 See how Teri McClure is related to other HistoryMakers
Donate Now

Corporate executive Teri McClure was born in 1963, in Kansas City, Kansas. She received her B.A. degree from Washington University in St. Louis, Missouri in marketing and economics and went on to earn her J.D. degree from Emory University School of Law in Atlanta, Georgia. McClure began practicing employment and labor law in Atlanta in 1988, and then began working for the United Parcel Service in 1995, as employment counsel to the Corporate Legal Department.

McClure became vice president of operations for UPS in 1999, the year UPS became a public corporation, and then was vice president of operations for the Central Florida district in 2003. During this time, McClure managed over four thousand employees and was responsible for all aspects of package pickup and delivery in that area. She also held an assignment with UPS Supply Chain Solutions during this time, which was the period that UPS was first expanding its supply chain capacities. From 2004 to 2005 McClure served as Compliance Department Manager for UPS, in which capacity she worked to ensure that the company followed ethical and legal business practices. After that, she was quickly promoted to compliance department manager and then was promoted again to corporate legal department manager. In 2006, McClure became the first African American senior vice president, general counsel and corporate secretary at UPS. This was at a time when only 15.7% of top corporate executives were women and only 1.6% of them were African American.

McClure has served on the board of the UPS Foundation, which is the charitable arm of the UPS Corporation. She has also served on the board of The Annie E. Casey Foundation, Junior Achievement Worldwide, Children’s Healthcare of Atlanta, the Atlanta Legal Aid Society, Equal Justice Works, and the Lawyers Committee for Civil Rights. McClure served as co-chair of the Georgia Supreme Courts Committee on Civil Justice and was involved with other civic, religious, and professional organizations.

See how Teri McClure is related to other HistoryMakers
Donate Now
Click Here To Explore The Archive Today!