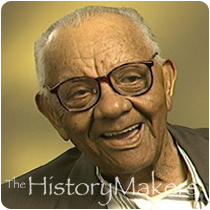 Ted "Double Duty" Radcliffe, one of Negro League Baseball's most popular players, was born on July 7, 1902, in Mobile, Alabama. He hails from the same community as fellow Negro League players Leroy "Satchel" Paige and Bobby "The Human Vacuum Cleaner" Robinson, all of whom grew up playing ball together. Because of the limited educational and economic opportunities available to African Americans at the time, baseball became a means for Radcliffe and his brother, Alex, a top Negro League third baseman, to leave Mobile and the segregated South.

Radcliffe excelled at both pitching and catching. He pitched in five and caught in nine all-star games. He was nicknamed "Double Duty" by Damon Runyon, who saw Radcliffe play in a 1932 Negro League World Series double header. Radcliffe caught for legendary pitcher Leroy "Satchel" Paige in a victorious first game and then pitched a shutout in the second.

The Negro League Baseball player began playing professional baseball in 1928 with the Detroit Stars. Over the course of his career, Radcliffe played with over fifteen Negro League teams, including three of Negro League Baseball's greatest teams: the 1930 St. Louis Stars, 1931 Homestead Grays, and 1932 Pittsburgh Crawfords.

In addition to pitching and catching, Radcliffe began managing teams in the late 1930s. He managed the Memphis Red Sox in 1937 and 1938 and took charge of the Chicago American Giants in 1943.

Radcliffe was the oldest living Negro League player in the United States at the time of his death on August 11, 2005, in Chicago.