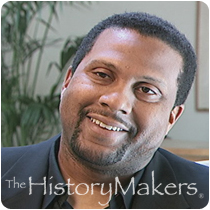 Favorite Color:
Blue
Favorite Food:
All Food
Favorite Time of Year:
Summer
Favorite Vacation Spot:
Sleeping
Favorite Quote:
If a task is once begun, never leave it till it's done. Be the labor great or small, do it well or not at all.

Favorite Color:
Blue
Favorite Food:
All Food
Favorite Time of Year:
Summer
Favorite Vacation Spot:
Sleeping
Favorite Quote:
If a task is once begun, never leave it till it's done. Be the labor great or small, do it well or not at all.

See how Tavis Smiley is related to other HistoryMakers

The third oldest of ten children, Tavis Smiley grew up near an Air Force base in Kokomo, Indiana, where his father was a master sergeant and his mother a Pentecostal minster. Smiley took an interest in politics from an early age, and in high school was voted class president and "Most Likely to Succeed". He attended Indiana University where the death of a classmate at the hands of the police first made him aware of the issues facing the African American community. Convinced that he wanted to pursue a political career, he spent a semester as an intern in the office of Los Angeles Mayor Tom Bradley, and graduated from Indiana University with a degree in Law and Public Policy.

After graduating, he returned to Los Angeles where he worked as an advisor to the City Council president and ran unsuccessfully for a council seat. Soon after his electoral defeat, Smiley started the Smiley Report, a 60 second radio news commentary. The report's popularity earned Smiley his own television talk show on Black Entertainment Television, BET Tonight with Tavis Smiley. The show was extremely popular among African Americans and Smiley earned national recognition for an eclectic program that featured interviews with the likes of Bill Clinton, Ice Cube and Pope John Paul II. In April 2001, thousands of Smiley's viewers were outraged when BET terminated his contract.

Since his departure from BET, Smiley is now a correspondent for ABC on Prime Time Thursday and Good Morning America, as well as a commentator for CNN. Smiley also hosts his own signature show on NPR, The Tavis Smiley Show from NPR, a first for an African American. He has authored five books, including How to Make Black America Better, and also writes for USA Weekend.

Throughout his career, Smiley has used his visibility to lead numerous successful public advocacy campaigns, among them, saving the popular Fox television show Living Single from a scheduled cancellation, convincing Sotheby's to donate slave artifacts intended for auction to an African American history museum, and pressuring prominent marketing and advertising firms to spend more money in the black community. In 1999, he founded The Tavis Smiley Foundation, which funds programs that develop young leaders in the black community.

Smiley's success has brought him numerous awards and honors. He received a Black Emmy Award in 2000, as well as a Congressional Black Caucus Harold Washington Award the same year. In 2001, he was honored with the NAACP President's Image Award, the Brotherhood Crusade's 2001 Walter Bremond Pioneer of African American Achievement Award and the Los Angeles Press Club Headliner Award.

See how Tavis Smiley is related to other HistoryMakers
Click Here To Explore The Archive Today! 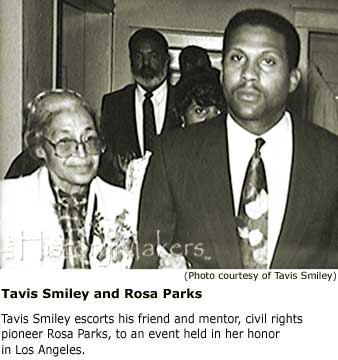 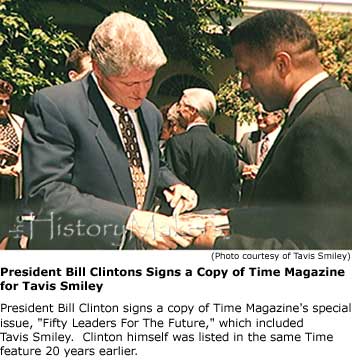