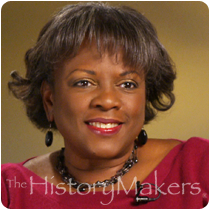 See how Sylvia Ewing is related to other HistoryMakers

Non-profit education executive, television personality and radio producer Sylvia Michelle Ewing was born in Erie, Pennsylvania on March 21, 1957 to Linwood Anthony Dennard a gospel music producer, and Louise Miller, a homemaker. She was raised by Louise Miller and her step father Milton Miller. She graduated from Technical Memorial Vocational High School in 1975.

Ewing came to Chicago, Illinois in 1977 and co-founded City Life, a free magazine for African Americans. During the 80s, she was active in the Anti-apartheid movement in Chicago and worked for the Mozambique Support Network In 1991, she became host of the "On-Target" radio series on Chicago's WVON-AM. Since 1994, Ewing has worked as an on-air host for Public Broadcasting Service (PBS) Chicago affiliate WTTW's pledge drive segments, and has done voice-overs for the station's programs and special projects. In 1999, she became a producer for WTTW's television program Chicago Tonight and served as producer for the Chicago Public Radio's WBEZ program Eight Forty-Eight from 2004 to 2006 and director of cultural relations of Steppenwolf Theater Company's Traffic Series for the 2007 - 2008 season. In 2008, she served as the Deputy Director and in 2010, became the Director of External Affairs for the Illinois Network of Charter Schools. Ewing also teaches media literacy and journalism classes as an adjunct professor at Columbia College Chicago and has written for Chicago Parent Magazine, the Chicago Sun-Times and N'DIGO Magazine.

Ewing has received the Award of Excellence from the Chicago Association of Black Journalists, the Peter Lisagor Award, the Edward R. Murrow Award, the Public News Directors, Inc. Award and has been nominated for three local Emmys. She has served on the board of directors for several organizations including the Association of Women Journalists, the Illinois College Access Network, and the Chicago Committee for Urban Opportunity and the Community Justice for Youth Institute. Ewing was the president of the Young Chicago Authors Board of Directors home of the Louder than a Bomb youth poetry festival and the co-creator of the concept for the Right to Succeed education organization. She is a certified meditation teacher and has practiced yoga since she was nineteen. Ewing lives in Chicago, Illinois and has two adult children Eve and Matthew.

Sylvia Ewing was interviewed by The HistoryMakers on January 19, 2012.

See how Sylvia Ewing is related to other HistoryMakers
Click Here To Explore The Archive Today!