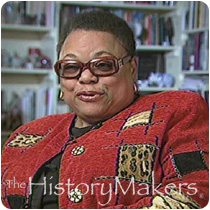 Historian and genealogist Clara Sylvia Cooke Martin was born on May 2, 1938 in Baltimore, Maryland. Her mother was a homemaker and her father was a pharmaceutical technician. At the age of sixteen, her father died and her mother took a job as an elevator operator to help care for Martin and her siblings. In 1955, Martin earned her high school diploma from Frederick Douglas High School, where she was active with the student council, honor society and school paper. From 1955 until 1957, Martin attended the University of Maryland where she was among the first group of African American students permitted to live in the campus dormitories.

Between 1963 and 1966, Martin worked for the Social Security Administration, starting as a file clerk and quickly moving her way through the ranks. Her initiative and hard work was recognized by personnel, earning her a position as a health insurance intern for Medicare in 1966. Martin was one of ten interns selected nationwide from a pool of more than 700 applicants. While an intern, she served on President Lyndon B. Johnson’s Conference on Medicare and Medicaid.

Returning to the Social Security Administration, Martin then worked as a manpower development specialist from 1967 until 1968, performing recruitment, staffing and counseling duties for prospective job seekers. From 1968 until 1970, she worked as a management intern for the department designing and implementing procedures for Social Security Upward Mobility programs. In 1970, Martin was promoted to senior career development specialist, a position she held until 1978. During this time, she also returned to school, completing her studies at Maryland and earning her B.S. degree in 1972 in economics. In 1978, Martin received her master’s degree in policy science from the University of Maryland, Baltimore County. From 1975 until 1979, she served on the faculty at Antioch College. In 1978, Martin was hired as the chief of staff training and development for the Library of Congress, where she developed and designed educational programs for approximately 5000 employees. She remained in that post until 1993. From 1994 until 1999, Martin worked as the McNair Scholars Program Coordinator at the University of Maryland Baltimore County. From 1997 until 2002 she was project manager and later CEO of the Ellicott City Colored School Restoration Project, the first school for blacks in Maryland built with state and county funds.

Martin has been the recipient of numerous awards for her civic and civil rights contributions. She is a member of Delta Sigma Theta Sorority, the Afro-American Historical and Genealogical Society, NAACP and the Oral History Association. In her spare time she enjoys traveling, writing poetry and designing wedding paraphernalia.

See how Sylvia Cooke Martin is related to other HistoryMakers
Donate Now
Click Here To Explore The Archive Today!