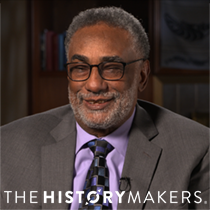 See how Sylvester Joubert is related to other HistoryMakers
Donate Now

Entrepreneur Sylvester Joubert was born on March 16, 1946 in Plaisance, Louisiana to Lillian and Adolph Joubert, Jr. Joubert graduated from Plaisance High School in 1965 and then received his certification in automotive mechanics in 1970 from the Technical School in Opelousas, Louisiana.

In 1970, he moved to Anchorage, Alaska to pursue career opportunities and went to work in aircraft and ground equipment maintenance at Western Air Lines in Anchorage in 1971. While working at Western Air Lines for nearly fifteen years, Joubert became “entrepreneurial” and developed multiple businesses. He established his first company:
Joubert Landscaping Plus which was in operation from 1972 to 1979. He opened an income tax office and bought and sold real estate. In 1980, he took a leave of absence from Western Air Lines, to dedicate more time to his businesses. In 1981, he was awarded a contract with the State of Alaska for Skycap and Storage Services at Anchorage International Airport. In the same year, Joubert became the first African American TEXACO station independent owner in the State of Alaska. He retired from Western Air Lines in 1985, and opened the eatery, Catfish Kitchen, bringing the freshwater food staple and his mother’s secret recipes to Alaska from the years of 1986 to 1988. He also has operated Advantage Car & Van Rental, an enterprise operating in equipment rental and leasing since 1988. Also, that same year, Joubert entered the car sales business full-time launching Midnight Sun Car Sales and then expanded the business, and added a rental car division called Midnight Sun Car & Van Rental, in 1997. With two Anchorage locations, and a staff of twenty five, he also instituted a hiring and mentoring internship program for high school and college students during the summer months. In 2002, Joubert served as president at Fairview Auto, Inc., a family-owned and operated used-car dealership in Anchorage.

Joubert was recognized for his accomplishments in business and awarded Entrepreneur
of the Year in 2017 by the National Association for the Advancement of Colored People (NAACP), Anchorage Branch.

Joubert and his wife JoAnn have two adult children, Christine and Gregory, and six grandchildren.

Sylvester Joubert was interviewed by The HistoryMakers on May 20, 2018.

See how Sylvester Joubert is related to other HistoryMakers
Donate Now