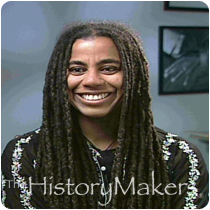 See how Suzan-Lori Parks is related to other HistoryMakers

Playwright Suzan-Lori Parks was born on May 10, 1963, in Fort Knox, Kentucky, to Francis McMillian Parks and Donald Parks, a colonel in the United States Army. As the child of a military officer, Parks spent some of her youth in German schools while her father was stationed in Europe. She attended college at Mount Holyoke College and studied fiction writing with James Baldwin, who recommended that she focus on writing for the theater. Parks began studying such playwrights as Ntozake Shange and Adrienne Kennedy, and she won honors for her experimental work The Sinner’s Place. Several of her early plays often addressed issues of race.

After graduating Phi Beta Kappa from Mount Holyoke College with her B.A. degree in English and German literature in 1985, Parks moved to London, where she began her career as a playwright. In 1987, her script Betting on the Dust Commander was produced in New York, and two years later, her play Imperceptible Mutabilities in the Third Kingdom was awarded an Obie Award for the best Off-Broadway play of 1989. In 1990, she also published The Death of the Last Black Man in the Whole World. Parks’ script for The American Play was produced in 1994; it starred an Abraham Lincoln-obsessed character who works in a carnival dressed in whiteface.

In 2001, Parks’ play Topdog/Underdog was produced to critical acclaim. It followed the story of two brothers and their growing tension, and starred Jeffrey Wright and Don Cheadle (who would be replaced by Mos Def when the play hit Broadway). Parks was awarded a Pulitzer Prize for drama, the first African American woman to do so. The following year, the John D. and Catherine T. MacArthur Foundation awarded her a MacArthur Fellowship of $500,000, known as the “genius grant.” During 2003, Parks published her first novel, Getting Mother’s Body, an experimental retelling of Faulkner’s As I Lay Dying. Parks also wrote screenplays for 1990’s Anemone Meand 1996’sGirl 6, directed by Spike Lee, as well as the radio plays “Pickling,” “Third Kingdom” and “Locomotive”.

Parks and her husband, blues musician Paul Oscher, live in Venice Beach, California. She works as a director at the California Institute of the Arts in Valencia.

Suzan-Lori Parks was interviewed by The HistoryMakers on November 21, 2006.

See how Suzan-Lori Parks is related to other HistoryMakers
Click Here To Explore The Archive Today!