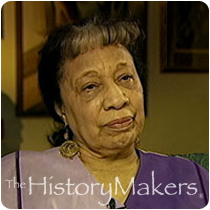 See how Susan Cayton Woodson is related to other HistoryMakers

Art enthusiast Susan Cayton Woodson helped collect and preserve several works from the Chicago Renaissance. Born on October 16, 1918, in Seattle, Washington, Woodson was raised by her maternal grandparents after her mother died when she was just a year old.

From an early age, Woodson was conscious of her heritage, and expected to live up to the reputations of her ancestors. Her great-grandfather, Hiram R. Revels, became the first African American senator in 1870 when he won election from Mississippi during Reconstruction. At home, Woodson was influenced by the accomplishments of her grandparents. Grandmother Susie Revels Cayton was a suffragette and union activist, and Woodson's grandfather, Horace Roscoe Cayton, published the Seattle Republican, the city's first black newspaper.

Woodson attended Washington State College until her grandfather's death in 1940; at that time her grandmother decided it would be best to send Woodson some place where she could get married, and chose to move her to Chicago. Paul Robeson, a friend of Woodson's siblings, flew out to chaperone Woodson on the drive to Chicago. In Chicago, Woodson lived in the Rosenwald; home to many of the city's black intellectuals and artists.

After working at the Supreme Liberty Life Insurance Company and the Amalgamated Clothing Workers Union, Woodson volunteered at the Parkway Community House where her uncle, Horace Cayton, Jr., became director; she herself became a board member in 1973. Over the years, Woodson befriended Eldzier Cortor, Langston Hughes, Ted Ward, Richard Wright, and many other artists and activists from the eras of the WPA and Chicago Renaissance. Woodson also formed relationships with Chicago's great artists, and began collecting art commemorating these important movements. The Susan Woodson Gallery houses the preeminent collection of the Chicago Renaissance and has attracted an international clientele.

Woodson served on the board of the South Side Community Art Center, and was a member of the Vivian G. Harsh Collection at the Carter G. Woodson Regional Library.

See how Susan Cayton Woodson is related to other HistoryMakers
Click Here To Explore The Archive Today!