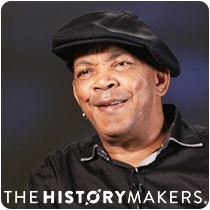 Blues musician Sugar Blue was born on December 16, 1949 in New York City to Maisey Savage and Jimmy Jones. Blue was given his first harmonica as a child and taught himself to play by listening to the music of Stevie Wonder and Bob Dylan. He attended Herron High School, but left without receiving his diploma. By the age of eighteen, Blue was performing on the streets of New York and sitting in on sessions with blues and jazz legends like Muddy Waters, Sun Ra, Roosevelt Sykes and Brownie McGhee.

In 1977, Blue played on Johnny Shines’ album Too Wet to Plow before moving to Paris, France on the advice of blues pianist Memphis Slim, where he was discovered by The Rolling Stones’ lead singer, Mick Jagger, who asked him play with the band as a session player. Over the next few years, Blue recorded the harmonica parts for three The Rolling Stones’ albums: Some Girls in 1978; Emotional Rescue in 1980; and Tattoo You in 1981. His most notable work was for the hit single “Miss You.” In 1978, Blue toured the U.S. with both The Rolling Stones and Louisiana Red, with whom he had recorded two albums. Blue’s debut solo album, Crossroads, was released in 1980. After the release of his From Chicago to Paris album in 1982, Blue relocated to Chicago, Illinois, where he played with well-known blues artists like Big Walter Horton, James Cotton and Junior Wells.

He also signed with Alligator Records, and joined Willie Dixon’s Chicago Blues All Stars in 1982. Blue recorded several albums throughout the 1980s including Absolutely Blue and High Voltage Blues. In 1985, he received the Grammy Award for Best Traditional Blues Album for his contribution to the compilation album Blues Explosion. Blue made a small appearance in the 1987 film Angel Heart and had a harmonica solo for the movie Tapeheads in the following year. Blue continued to release new albums through Alligator Records including Paris Blues in 1993 and Blue Blazes in 1994. After a short hiatus, he released the album Code Blue in 2007, and appeared in the 2008 film The Perfect Age of Rock ‘n’ Roll. He recorded new music on the 2010 album Threshold and his live project Raw Sugar, released in 2012. Blue then released the album Voyage in 2016.

Blue and his wife, Ilaria Lantieri, have one son together, James, and Blue also has a daughter named Sarah.

Sugar Blue was interviewed by The HistoryMakers on June 10, 2018.