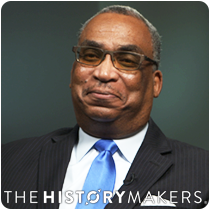 See how Steven Rogers is related to other HistoryMakers
Donate Now

Professor Steven Rogers was born on June 14, 1957 in Chicago, Illinois to J.P. Rogers and Ollie Mae Rogers. He was accepted into A Better Change program and attended Radnor High School in Radnor, Pennsylvania, graduating in 1975. He went on to receive his B.A. degree from Williams College in Williamstown, Massachusetts in 1979, and his M.B.A. degree from Harvard Business School in 1985.

After graduation from Williams College, Rogers worked at Cummins Engine Company and later moved to Rocky Mount, North Carolina to work for Consolidated Diesel in 1981. He went to work for Bain and Company; and, in 1989, Rogers and his wife Michele Rogers purchased their first company, Fenchel Lampshade Company in Chicago, Illinois. In the following years, the couple purchased another lampshade company and a retail store. In 1995, Rogers sold his ventures and joined the faculty at Northwestern University’s Kellogg School of Management. During his tenure, Rogers became the director of the Larry and Carol Levy Institute for Entrepreneurial Practice. After seventeen years at the Kellogg School of Management, Rogers joined the faculty at Harvard Business School in 2012. The following year, Rogers became the faculty director for the Inner City Initiative for Competition. In 2016, he was a volunteer visiting professor at the United States Military Academy for the Army at West Point. Rogers also served as strategic advisor at OCA Ventures.

Rogers joined the board of directors of SuperValu, Inc. as director in 1998. He also joined the board at S.C. Johnson & Wax and Oakmark Mutual Funds. Rogers was named one of the top twelve entrepreneurship professors at graduate business schools in the U.S. by BusinessWeek in 1996. The following year, he was named one of the fourteen “New Stars of Finance” by BusinessWeek. In 1998, he was selected as Entrepreneur of The Year by Ernst & Young and received the Bicentennial Medal for Distinguished Achievement from Williams College in 2000. In 2005, Rogers received the Bert King Award for Service from the African American Student Union at Harvard Business School. Rogers was also named one of the top 150 influential people in America by Ebony Magazine. Rogers was also the most decorated professor in the Kellogg School of Management’s history and received the Outstanding Professor Award for the Executive Program 26 times and the M.B.A. Lawrence Levengood Outstanding Professor of the Year award twice.

Steven Rogers was interviewed by The HistoryMakers on November 16, 2018.

See how Steven Rogers is related to other HistoryMakers
Donate Now