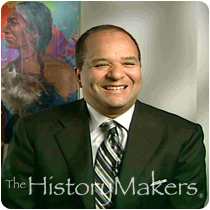 See how Steven Roberts, Sr. is related to other HistoryMakers
Donate Now

Entrepreneur Steven Craig Roberts was born on April 11, 1952, in St. Louis, Missouri, to Delores Talley Roberts and Victor Roberts. Roberts grew up the second of four siblings, and was particularly close to his brother, Michael V. Roberts. The family was educated in the St. Louis Public School System, and Roberts began working early on, earning money working around the neighborhood and delivering newspapers.

Roberts attended Clark University in Massachusetts as a Danforth Fellow, and initially considered a career either in the ministry or in medicine. Roberts instead began studying at Washington University in St. Louis to get his law degree. In 1974, while he was attending law school, his brother Michael began Roberts-Roberts and Associates, which became a business and construction management firm in St. Louis.

Roberts graduated with dual J.D. and M.A. degrees in 1978, and the following year, ran to become an alderman in St. Louis, joining his brother Michael who had been elected two years previously. Roberts was the youngest person to become an alderman in St. Louis, where he served along with his brother, Michael, and longtime friends Mike Jones, Virvus Jones and Wayman Smith; he held this position until 1993. During his terms as alderman, Roberts was the chief sponsor of the St. Louis Center and Union Station developments in St. Louis, and was particularly involved with major redevelopment projects for the city.

In 1981, Roberts and his brother began Roberts Broadcasting, a new branch of the duo’s business empire. After establishing WRBU-TV in St. Louis, the Roberts brothers would go on to build eleven more successful television stations across the country, from Santa Fe, New Mexico, to Mobile, Alabama. During the building of these stations, the Roberts became more familiar with the business behind construction, inspiring the founding of Roberts Construction Company in 1989. This additional holding supplemented a growing commercial and residential development company the brothers established in 1982 known as Roberts Brothers Properties, an organization that has processed more than $25 million in redevelopment.

In 1999, the first Sprint PCS-affiliated Roberts Wireless store opened in Jefferson City, Missouri, the only PCS company that is entirely African American-owned in the country. Today, the Roberts Companies are a $460 million, thirty-four-company organization; these companies include an aviation division, a gated Bahamas community and real estate development. Roberts serves as president of the company, while his brother Mike serves as chairman of the board. Roberts has also served on the board of directors of Pulaski Financial Corporation, an independent, community-based bank based in St. Louis, since 2006.

Roberts is married to Eva Frazer, M.D.; the couple has three children.

See how Steven Roberts, Sr. is related to other HistoryMakers
Donate Now
Click Here To Explore The Archive Today!