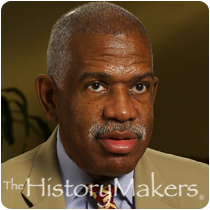 See how Steven Richardson is related to other HistoryMakers

Physicist and engineering professor Steven L. Richardson was born on July 22, 1953 in Brooklyn, New York. His father, Edward Alfred Richardson, was a subway conductor and his mother, Juanita Pearl Richardson, was a nurse. Richardson excelled in academics and pursued his interests in literature, science and mathematics at Brooklyn Preparatory High School. He attended Columbia University where he studied chemistry on a National Achievement Scholarship. He received advanced degrees from The Ohio State University: his M.S. degree in physics in 1981 and his Ph.D. degree in theoretical condensed matter physics in 1983. During his graduate studies, he was an International Business Machines (IBM) Minority Graduate Fellow and a Xerox Graduate Fellow. At Xerox, he discovered a new semiconductor surface for Gallium arsenide (GaAs), which he included in his Ph.D. dissertation.

Following graduation, Richardson was a Chancellor's Distinguished Postdoctoral Fellow at the University of California, Berkeley and in 1985, he was a Ford Foundation Postdoctoral Fellow at Lawrence Berkeley National Laboratory. In 1986, Richardson was hired to work at Eastman Kodak Company as a senior research scientist in the Solid State Science Laboratories. From 1987 to 1988, he took a temporary leave from Kodak to serve as program director for the National Science Foundation (NSF) Condensed Matter Theory Program. In 1989, he joined the Department of Electrical and Computer Engineering at Howard University as an associate professor and associate director of the Materials Science Research Center of Excellence. In 1995, Richardson was promoted to full professor. From 1997 to 2011, he served as a summer faculty fellow with the United States Navy-American Society for Engineering Education’s Summer Faculty Program at the Naval Research Laboratory. Richardson's research utilized supercomputers to calculate the structural, electronic and vibrational properties of molecules. His research has been supported by many public institutions including, the Office of Naval Research, the U.S. Department of Energy (DOE) and the National Science Foundation.

Steven Richardson was interviewed by The HistoryMakers on July 14, 2012.

See how Steven Richardson is related to other HistoryMakers
Click Here To Explore The Archive Today!