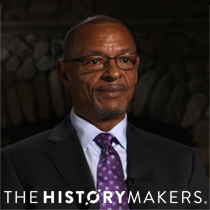 See how Steven Jackson is related to other HistoryMakers
Donate Now

Jackson began his career in the automotive industry at the age of eighteen working as a detailer for Klamath Falls Honda, before being promoted to salesperson. Jackson purchased his first automobile dealership, General Motors/GMC outlet in Sacramento, California in 1989. He then opened and operated Folsom Buick Pontiac GMC from 1998 to 2007 in Sacramento. In 2008, he opened Toyota of Rockwall in Dallas, Texas which was also the first automotive dealership to earn a LEED Gold certification by the U.S. Green Building Council for excellence in environmental design, and named “Top 100 Places to Work” for 2010 by the Dallas Morning News. In partnership with his wife Barbara Jackson, they purchased Toyota Subaru Scion of Corvallis in Western Oregon in 2013. Jackson has served as the principal for the Jackson Automotive Investment Group, which included six dealership outlets Folsom Buick Pontiac GMC and Folsom Lake Volkswagen in Sacramento, California, Toyota of Rockwell in the Dallas Metroplex, Texas and Toyota of Corvallis, Subaru of Corvallis and Toyota of Newport in Oregon. The Jackson Automotive Investment Group has been active in the community and has supported such programs as; Teachers of the Year Annual Car Lease Partnership, Toyota Matching Grant(s) for School Districts; organizations including Meals on Wheels, National Court Appointed Special Advocate (CASA) Association, Boys & Girls Clubs of Corvallis, School Supply Giveaway, Timberhill Athletic Club, One Man’s Treasure, Rockwell Independent School District and events including the Teddy Bear Toss program with Oregon State University.

Jackson and his wife, Barbara Jackson, have four adult children, including Tabitha, Chelsea, Steven and Jasmine.

Steven Jackson was interviewed by The HistoryMakers on August 12, 2018.

See how Steven Jackson is related to other HistoryMakers
Donate Now