Information about Steven A. Cutting 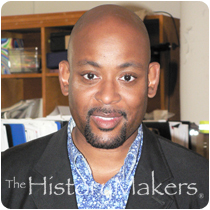 See how Steven A. Cutting is related to other HistoryMakers

Fashion designer Steven Alan Cutting was born in Prospect Heights, Brooklyn, New York on June 8, 1961 to Russaloin and Clement Cutting. Cutting learned to sketch at six years old, and by the time he graduated from Queens’ Christ the King Regional High School, he was determined to pursue a career in fashion. Cutting earned his B.F.A. degree from the Fashion Institute of Technology in 1983.

After college, Cutting worked on Seventh Avenue with the design firm Enrico Masei. Then he moved to Italy and worked at a freelance studio owned by Anna Schpioni. Cutting worked in Italy and Germany where he was a designer for Krizia and Chiwitt from 1983 to 1985. In late 1985, Cutting returned to the United States and became the head designer for Philippe Monet. While at Philippe Monet, Cutting traveled extensively and began to specialize in leather and cloth outerwear. In 1990, he established his own freelance company, Steven A. Cutting, Inc. The company’s clients included Kenneth Cole, Reebok, Collage, and Pony. Cutting worked for himself until 1996, when he became head designer for Perry Ellis America. In 1999, he joined First Manufacturing Company, where he was the design director for Jimmy and Marylou and the Whet Blue Collections. In 2000, Cutting was hired by the Larry Levine and Boston Outfitters labels. Cutting has worked with the House of Dereon owned by Beyoncé and Tina Knowles and has also established his own label, Katalyst.

Steven Cutting was interviewed by The HistoryMakers on August 30, 2007.

See how Steven A. Cutting is related to other HistoryMakers
Click Here To Explore The Archive Today!