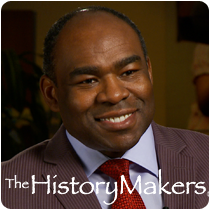 See how Steve Smith is related to other HistoryMakers

Education administrator Steve Smith was born in 1964 in Albany, Georgia. After graduating from high school, he attended several institutions of higher education. Smith received both his B.A degree in English education and M.A. degree in education administration from the University of Georgia. He also holds an Ed.S. degree in education management from Troy State University. In 2010, Smith earned his M.B.A. degree after completing the executive format of the University of Georgia’s M.B.A. program at Terry College. The program included an international residency to Vietnam and China. In addition, Smith is a graduate of Leadership Atlanta and Leadership Georgia

Smith has over twenty-five years of business leadership experience, ranging from education, marketing and communications to business development and fiscal management. From 1991 to 1997, Smith served as a principal in the Fulton County School System, and was director of administrative services for Georgia Public Broadcasting. Smith served as vice president of corporate responsibility for Turner Broadcasting System, Inc. (TBS), where he directed the review, selection and funding of community non-profit organizations through TBS, Inc.’s corporate philanthropy program. In 2009, Smith founded and served as principal of Steve Smith Consulting, LLC, and became a founding investor and board member of Atlantic Capital Bank – an $850 million community bank based in Buckhead, Georgia. In 2011, Smith was appointed as the deputy superintendent and chief of staff for Atlanta Public Schools, where he has executive control and direct oversight responsibility for all aspects of the day to day operations of the district.

Smith has also served on the board of directors of numerous organizations, including the Atlanta Convention and Visitors Bureau, Georgia Chamber of Commerce 100 Black Men of Atlanta, Georgia Partnership for Excellence in Education, University of Georgia Trustees, University of Georgia Alumni Association, Metro Atlanta Arts & Culture Coalition, Metro Atlanta YMCA, 191 Club and the Atlanta Business League. He has served as a gubernatorial appointment to the Independent Redistricting Task Force, and was a mayoral appointment to the Atlanta Arts & Cultural Funding Task Force.

Steve and his wife, Dr. Debra Smith, lived in Atlanta with their son, Steven, Jr.

Steve Smith was interviewed by The HistoryMakers on December 17, 2012.

See how Steve Smith is related to other HistoryMakers
Click Here To Explore The Archive Today!