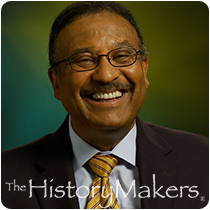 Favorite Color:
Brown
Favorite Food:
Pizza
Favorite Time of Year:
Winter
Favorite Vacation Spot:
Anywhere
Favorite Quote:
It Is Better To Have And Not Need Than To Need And Not Have.

Favorite Color:
Brown
Favorite Food:
Pizza
Favorite Time of Year:
Winter
Favorite Vacation Spot:
Anywhere
Favorite Quote:
It Is Better To Have And Not Need Than To Need And Not Have.

See how Steve Baskerville is related to other HistoryMakers
Donate Now

Broadcast meteorologist Steve Baskerville was born in Philadelphia, Pennsylvania in 1950. He attended the School of Communications and Theater at Temple University and graduated from there in 1972 with his B.S. degree in communications. Later, in 2006, Baskerville earned a certificate in broadcast meteorology from Mississippi State University. He received his American Meteorological Society (AMS) Seal of Approval in 2007.

In 1972, Baskerville began his broadcasting career and was hired by the Philadelphia School District Office of Curriculum where he hosted a children’s show on public radio. He then joined KYW-TV, the NBC affiliate in Philadelphia, from 1977 to 1984. While there, Baskerville worked as a weatherman, co-hosted a morning talk show with Maurice “Maury” Povich, and hosted a daily children’s program which was honored by Action for Children’s Television. In 1984, Baskerville was hired by CBS as a broadcast meteorologist on their “Morning News” segment, making him the first African American network weatherman. Then, in 1987, he became the weatherman for WBBM-Channel 2 in Chicago, Illinois.

Baskerville’s interest in children’s programming led him to host a two-hour special, “Dealing with Dope.” He also co-hosted a children’s issues program for WCBS-TV titled, “What If.”
In addition, Baskerville has displayed his diverse skills by hosting projects such as “Thanks to Teachers,” a salute to area educators; “Taste of the Taste,” a half-hour live broadcast from the Taste of Chicago; the “All-City Jamboree,” a high school talent competition; and “Beautiful Babies,” a public service campaign.

Baskerville has been honored for excellence throughout his career. In 1999, he won an Emmy Award for the news feature series, “Best of Chicago”; and, in 2001, he was honored by the Illinois Broadcasters Association for “Best Weather Segment.” Baskerville served as host for CBS 2 Chicago’s Emmy-Award winning program, “Sunday! With Steve Baskerville!” He received local Emmy Awards for his work on CBS 2’s 2004 broadcast of the LaSalle Bank of Chicago Marathon, and his coverage of the deadly tornado in Utica, Illinois in 2004. In addition, he received an Emmy Award in 2005 for the news feature, “Steve’s Getaway Guide.” In 2006, Baskerville earned several more local Emmy Awards including the “Outstanding Achievement for Individual Excellence.”

Steve Baskerville was interviewed by The HistoryMakers August 24, 2013.

See how Steve Baskerville is related to other HistoryMakers
Donate Now
Click Here To Explore The Archive Today!