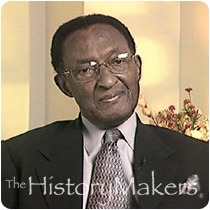 See how Sterling Tucker is related to other HistoryMakers
Donate Now

Politician, activist and governmental appointee Sterling Tucker was born in Akron, Ohio on December 21, 1923. He attended the city’s public schools, graduating from West High School in 1942. From there, he enrolled in the University of Akron, earning his A.B. in 1946 in sociology, and his M.A. in psychology in 1950.

Following the completion of his master’s degree, Tucker moved to Washington, D.C., and in 1956, he became the head of the Washington chapter of the Urban League. He remained in that position until 1974, when he was elected to the Washington, D.C. City Council. While working for the Urban League, Tucker organized Solidarity Day, held on June 19, 1969, as a massive protest in the nation’s capitol. The event, led by Reverend Ralph Abernathy and Coretta Scott King, was held during the Poor People’s Campaign, and brought 50,000 demonstrators to the streets of Washington before the police disrupted the event. After four years of serving on the city council, Tucker made a run for the office of mayor, but lost to Marion Barry.

Following his defeat in the mayoral campaign, Tucker was named assistant secretary of the Department of Housing and Urban Development, and he remained there until 1981. That year, he opened Sterling Tucker Associates, a management consulting firm, where he continues to serve as president today. Tucker also spent the years of 1988 to 1990 as the drug czar of the Washington, D.C. government, where he worked to develop strategies for combating drug usage.

See how Sterling Tucker is related to other HistoryMakers
Donate Now
Click Here To Explore The Archive Today!