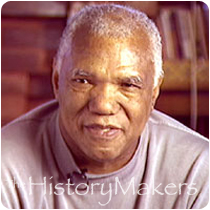 "You Have to Believe That You're Beyond the Best."

Chicago poet Sterling Plumpp was born January 30, 1940, in Clinton, Mississippi. Educated in public and religious schools, he graduated from high school in 1960 and went on to attend Roosevelt University in Chicago, earning a B.A. in 1968 and an M.A. in 1971.

Growing up poor in rural Mississippi, Plumpp worked in the cotton and cornfields and by the time he was eleven, he was expected to grow up to be a field hand. A bootlegger aunt had other plans for him, however, and paid for him to attend Holy Ghost High School in Jackson, Mississippi. Earning a scholarship to a small local college, Plumpp began his college education, but the scholarship money ran out, so he hitchhiked to Chicago in 1962. He worked in a post office until 1964, and during that time, he began writing his poetry.

Plumpp saw his first poems published in 1971 in Negro Digest and was hired to teach English and later African American studies at the University of Illinois, Chicago. His poetry, often based on blues and jazz rhythms, has won him numerous awards, including the Richard Wright Literary Excellence Award, the Carl Sandburg Literary Award for poetry, and three Illinois Arts Council awards. He has published twelve volumes of his work.

In recent years, Plumpp won a lottery jackpot, and he plans on leaving most of the money to his daughter, whose birth he describes as his most joyous occasion in life. Some of the money will also be used for returning to his native South, as well as a trip to Africa. Plumpp retired from UIC in 2001.