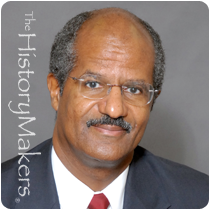 See how Stephen McGuire is related to other HistoryMakers

Nuclear physicist and physics professor Stephen C. McGuire was born on September 17, 1948 in New Orleans, Louisiana. McGuire was the first generation of his family to attend high school and college. McGuire’s parents were supportive of his education and inspired him to high achievements. By the time that McGuire graduated as valedictorian of his class at Joseph S. Clark Senior High in New Orleans, Louisiana, he knew that he wanted to pursue a career in physics. McGuire went on to attend Southern University and Agricultural and Mechanical (A&M) College on a four-year academic scholarship. He received his B.S. degree in physics, magna cum laude, in 1970. McGuire then continued his education at the University of Rochester where he studied under Professor Harry W. Fulbright and graduated with his M.S. degree in nuclear physics in 1974. In 1979, McGuire obtained his Ph.D. degree from Cornell University in nuclear science with a focus on low energy neutron physics under the guidance of Professor David D. Clark.

Between 1979 and 1982, McGuire conducted research as a staff scientist at Oak Ridge National Laboratory. In 1982, McGuire joined the faculty at Alabama A&M University in the department of physics and applied physics, and he began research with the National Aeronautics and Space Administration (NASA). McGuire was honored by NASA in 1987 with its Office of Technology Utilization Research Citation Award. While at Alabama A&M, he also served as a consultant to the National Institutes of Health (NIH) and the U.S. Department of Energy, and spent time as a physics researcher at Lawrence Livermore National Laboratory (LLNL). In 1989, he became the first African American faculty member at the endowed College of Engineering at Cornell University. In 1992, he became a charter fellow of the National Society of Black Physicists (NSBP). With research focusing on experimental nuclear physics and nuclear radiation and microelectronics, McGuire was appointed to be a visiting scientist at the Center for Neutron Research at the National Institute of Standards and Technology in 1998.

Since 1999, McGuire has served as professor and chair of the department of physics at Southern University and A&M College in Baton Rouge, Louisiana. McGuire has pursued his interest in optical materials as part of the Laser Interferometer Gravitational-Wave Observatory (LIGO). During his tenure with the university, McGuire has led the establishment of the partnership between LIGO and Southern University and A&M College, and he served as the LIGO Scientific Collaboration Principal Investigator (PI). He considers this his greatest achievement. McGuire is a Fellow of the American Physical Society. He is married to the former Saundra E. Yancy. They have two adult daughters, Carla and Stephanie.

Stephen McGuire was interviewed by The HistoryMakers on August 18, 2012.

See how Stephen McGuire is related to other HistoryMakers
Click Here To Explore The Archive Today!