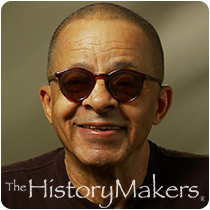 Fashion designer Stephen Burrows was born on September 15, 1943 in Newark, New Jersey to Gerald Burrows and Octavia Pennington. At a very young age, Burrows started sewing and making clothes under the guidance of his grandmother, Beatrice Simmons. He went on to attend elementary school in Newark, New Jersey, and graduated from Arts High School in 1960. Burrows then attended the Philadelphia Museum College of Art from 1961 to 1962, and later graduated from the Fashion Institute of Technology in New York City in 1966.

Upon graduation, Burrows was hired as a fashion designer for Weber Originals, but decided to work freelance in 1967. In 1968, he co-founded O Boutique in New York City. The following year, Burrows launched a ready-to-wear collection for the upscale department store Bonwit Teller with his friend Roz Rubenstein. In 1969, Burrows was introduced to Geraldine Stutz, president of the Henri Bendel department store, and was hired and offered his own boutique called Stephen Burrows World. The success of Stephen Burrows World was immediate, and allowed Burrows to cater to celebrity clientele such as Diana Ross, Cher and Barbra Streisand. In 1973, he left Bendel’s, founded Burrows, Inc., and began working on New York’s Seventh Avenue. That same year, Burrows was one of five American designers invited to show his clothes on the runway of Versailles, France, where he received rave reviews. He became the first African American designer to gain international fame.

In 1977, Burrows returned to Henri Bendel and joined Pat Tennant, Inc., but left again in 1982. In 1993, he became affiliated once more with Bendel’s, and in 2002, reopened Stephen Burrows World. In 2010, Burrows designed a collection for Target retail stores and opened a showroom and design studio in New York City’s garment center. In 2013, he became designer and president of Stephen Burrows, LTD.

Burrows has been honored with three Coty American Fashion Critics’ Awards, the highest praise that can be awarded in fashion. In 1975, he received the Council of American Fashion Critics Award and the Knitted Association Crystal Ball Award. He was named to the Fashion Walk of Fame in 2003 and received the Council of Fashion Designers of America’s Board of Directors Special Tribute Award in 2006. In 2014, Burrows was honored with lifetime achievement awards from the Savannah College of Art and Design and the Pratt Institute of Design.

Stephen Burrows was interviewed by The HistoryMakers on July 14, 2014.