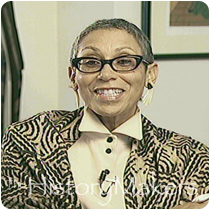 Favorite Color:
Yellow
Favorite Food:
Salad
Favorite Time of Year:
Fall
Favorite Vacation Spot:
Sapello Island, Georgia
Favorite Quote:
All Things Work Together For The Good Of Those That Love The Lord And Are Called According To His Purpose.

Favorite Color:
Yellow
Favorite Food:
Salad
Favorite Time of Year:
Fall
Favorite Vacation Spot:
Sapello Island, Georgia
Favorite Quote:
All Things Work Together For The Good Of Those That Love The Lord And Are Called According To His Purpose.

See how Stephanie Hughley is related to other HistoryMakers
Donate Now

Arts administrator and producer Stephanie Smith Hughley is executive producer and co-founder of the National Black Arts Festival in Atlanta, Georgia, one of the most important African American arts festivals in the world and founded in 1987. Hughley served as its Artistic Program Director until 1992. She returned to Atlanta in 1999 to revive the failing and debt stricken organization. Under her leadership, the festivals have expanded from a bi-annual summer arts festival to a yearly ten-day festival held during the month of July and a year round African arts cultural teaching institution, which includes an annual curriculum for teachers and students.

Hughley was born in Canton, Ohio to Lillie Mae and Robert Lee Smith, Sr. on October 16, 1948. She attended Kent State University with aspirations of becoming a medical doctor. While at Kent State, she was introduced to dance. Hughley moved to Boston, Massachusetts in 1969 where she completed her studies and entered the Elma Lewis School of Fine Arts. Hughley obtained her B.S. degree in biology from Northeastern University and her M.Ed. from Antioch College at Harvard University in Cambridge, Massachusetts.

In 1971, Hughley became a dance instructor and taught at Smith College as well as Northeastern, Brandeis and Harvard Universities. She danced with the Dance Theatre of Boston and the National Center of Afro American Artists. In 1976, Hughley moved to New York City, auditioned for a part in the Broadway production of Bubbling Brown Sugar, studied dance at the Alvin Ailey School of Dance and the Little Red School House and apprenticed under the directorship of Ashton Springer in order to expand her theatre management skills. She became General Manager of the Negro Ensemble Company in 1982. Hughley managed and supervised the production of over twelve Broadway shows including, Your Arms Are Too Short To Box With God, Ain’t Misbehavin’ andBubbling Brown Sugar and toured the United States and Europe as the Company Manager of For Colored Girls.

In 1992, Hughley was Theatre and Dance Producer for the Atlanta Committee for the Cultural Olympiad for the 1996 Olympic Games. In 1996, she was commissioned to serve as Vice President of Programs for the newly formed New Jersey Performing Arts Center. Hughley returned to Atlanta in 1999 to become head of the Black Arts Festival.

Hughley serves on the boards of the Metro Atlanta Arts and Culture Coalition (MAACC) and the Atlanta Convention Center and Visitors Bureau. She has been a member of the Association of Theatrical Press Agents and Managers since 1977.

Hughley resides in the Atlanta area with her surviving son, daughter-in-law and three grandchildren.

See how Stephanie Hughley is related to other HistoryMakers
Donate Now
Click Here To Explore The Archive Today!