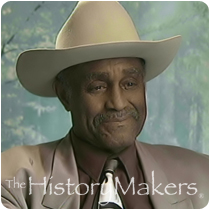 See how Stanley Tolliver, Sr. is related to other HistoryMakers
Donate Now

Attorney, community activist, and media personality, Stanley Eugene Tolliver, Sr., was born in Cleveland, Ohio, on October 29, 1925, the only child of Eugene and Edna Tolliver. Tolliver graduated from East Technical High School in 1944, and earned his bachelor’s degree from Baldwin-Wallace College in 1948. Tolliver completed his legal education at Cleveland Marshall School of Law, earning his LLB degree in 1951, his LLD degree in 1968, and his J.D. degree in 1969.

After completing his LLB degree, Tolliver served in the U. S. Army Counterintelligence Corps from 1951 through 1953, and then passed the bar exam while in the army in 1953. Tolliver was admitted to the U.S. Supreme Court in 1977. Tolliver served as legal counsel for the Rev. Dr. Martin Luther King, Jr.; the Southern Christian Leadership Conference (SCLC); and the Congress of Racial Equality; he was also the only African American attorney involved in the defense of the students charged in the Kent State University anti-Vietnam War protest in the 1970s.

Tolliver joined other Ohioans in leading the call for the desegregation of the Cleveland Public Schools. After the state and local boards of education were found guilty of operating a segregated school system in Cleveland, the presiding jurist in the case, Federal Judge Frank J. Battisti, appointed Tolliver to committees on office and school monitoring, and community relations in 1978. Tolliver was first elected to membership on the Cleveland Board of Education in 1981; his twelve years of service on the board included two terms as board president.

Tolliver was the recipient of numerous awards and honors, including the Outstanding Alumnus Award from Baldwin-Wallace College in 1978, and the NAACP (Cleveland Chapter) Freedom Award in 2000. An avid runner since high school, Tolliver was inducted into the East Technical High School’s Athletic Hall of Fame in 1978. Tolliver was also a life member of the NAACP, and the host of a popular weekly radio show, Conversations with Stanley E. Tolliver, Sr.

See how Stanley Tolliver, Sr. is related to other HistoryMakers
Donate Now
Click Here To Explore The Archive Today!