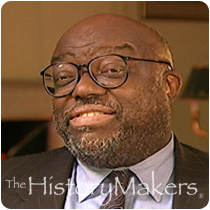 See how Stanley Crouch is related to other HistoryMakers

An outspoken writer and critic, Stanley Crouch was born in Los Angeles, California, on December 14, 1945. Encouraged by his mother, Crouch began writing at the age of eight. Crouch became active in the Civil Rights Movement while in junior high school. After graduating from high school, he attended two junior colleges in the Los Angeles area. While studying at the East Los Angeles Junior College, Crouch worked for a poverty program in East Los Angeles, teaching a literacy class. In August 1965, Crouch witnessed the Watts Riot firsthand. This experience radicalized Crouch and he became a black nationalist.

From 1965-1967, Crouch was an actor-playwright in the Studio Watts Company. While at the Studio Watts Company, Crouch discovered the writings of Ralph Ellison and Albert Murray who became major influences in Crouch's thinking. This influence caused him to turn away from the black nationalist movement, finding it too reactionary. Crouch taught at the Claremont Colleges in California from 1968-1975 and moved to New York in 1975. For his first five years in New York, Crouch played the drums in an avant-garde jazz band, later becoming a staff writer for the Village Voice (1979-88). It was during this time that Crouch started to find his voice as a writer. Then, in the 1980s, he became the spokesperson for popular jazz trumpeter Wynton Marsalis.

Crouch has written articles for the New York Daily News and articles for magazines such as The New Yorker, The New Republic, and Esquire. He is the author of three collections of essays, Notes of a Hanging Judge (1990), The All-American Skin Game, or, The Decoy of Race: The Long and Short of It, 1990-1994 (1995), and Always in Pursuit: Fresh American Perspectives, 1995-1997 (1998) and one novel, Don't the Moon Look Lonesome: A Novel in Blues and Swing (2000).

See how Stanley Crouch is related to other HistoryMakers
Click Here To Explore The Archive Today!