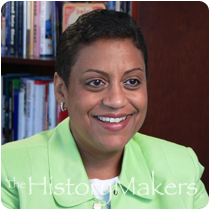 See how Stacey Stewart is related to other HistoryMakers
Donate Now

Chief executive and philanthropist Stacey Davis Stewart was born on March 1, 1964 in Atlanta, Georgia. Inspired by her parents Myrtle Reid Davis and Albert Miles Davis, who were both committed to public service, Stewart developed an interest in community outreach from a young age. Stewart received her B.A. degree in economics from Georgetown University in 1985, and later received her M.B.A degree from the University of Michigan.

In 1987, Stewart became a senior associate with Merrill Lynch in New York, and worked there until 1990. Stewart worked in the public finance division, assisting state and local governments in structuring more than $2 billion in funding for housing and infrastructure projects. In 1990, Stewart became vice president for the investment banking firm Pryor, McClendon, Counts & Company.

In 1992, Stewart became the public affairs director for the Housing and Community development department for Fannie Mae Foundation in Atlanta. In this role, Stewart was responsible for implementing low and moderate income homebuyer programs. In 1995, Stewart became vice president of the department before becoming the President and Chief Executive Officer for the Fannie Mae Foundation in 1999.

In 2007, the Fannie Mae Foundation announced that the company would consolidate its philanthropic initiatives into the Office of Community and Charitable Giving, which Stewart heads as the senior vice president.

Stewart is the recipient of numerous awards including a 2004 Women of Distinction award from the American Association of University Women and honorary doctorate degrees from Morgan State University and Trinity College.

Stewart was interviewed by The HistoryMakers on July 31, 2007.

See how Stacey Stewart is related to other HistoryMakers
Donate Now
Click Here To Explore The Archive Today!