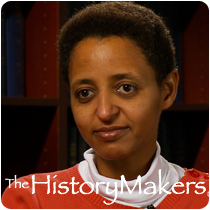 See how Sossina Haile is related to other HistoryMakers
Donate Now

Professor of Materials Science and Chemical Engineering Sossina Haile was born on July 28, 1966 in Addis Adeba, Ethiopia. After her family left Africa during an uprising in the 1970s, Haile grew up in Minnesota. She attended the Massachusetts Institute of Technology where she received her B.S. degree in 1986. She went on to receive her M.S. degree from the University of California, Berkeley and her Ph.D. degree from the Massachusetts Institute of Technology in 1992. While in school, Haile received the AT&T Cooperative Research Fellowship and the Fulbright Fellowship to continue her studies. The Fulbright, along with a Humboldt Fellowship the following year, allowed her to study at the Max Palnck Institute für Festkörperforschung in Germany.

Upon receiving her Ph.D. degree, Haile assumed an assistant professorship at the University of Washington, Seattle where she stayed until 1996 when she joined the faculty at the California Institute of Technology. Her research group investigates ionic conduction in solid materials with applications to batteries and fuel cells. Haile is known for her work with the latter - in the 1990s she fabricated the first solid-acid fuel cell in her lab, regarded as a gateway to more powerful, commercial cells. In comparison to other fuel cells, Haile’s is unique for its creation of energy at hot enough to be efficient, but not so hot as to be expensive. In 2003, two of her graduate students created Superprotonic, a company focused on fuel cells, with Haile as science adviser. Most recently, Haile has received recognition for developing new ways of using solar energy to make fuels like hydrogen and methane.

Haile is the recipient of the NSF National Young Investigator Award (1994-1999) and the 2001 J.B. Wagner Award from the High Temperature Materials Division of the Electrochemical Society. Newsweek Magazine named her one of “12 people to watch in 2008,” and in 2010, Haile won both the Chemical Pioneer Award of the American Institute of Chemists and the Chow Foundation Humanitarian Award.

Haile lives with her two children and spouse in southern California.

Haile was interviewed by The HistoryMakers on November 29, 2012.

See how Sossina Haile is related to other HistoryMakers
Donate Now
Click Here To Explore The Archive Today!