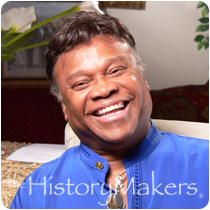 See how Sonny Turner is related to other HistoryMakers

R&B singer Charles Arnold “Sonny” Turner was born on September 24, 1939 in Fairmount, West Virginia. Turner’s mother, Pearl, was a gospel singer and his father Carl, was a boxer. In 1949, Turner moved to Cleveland, Ohio, where he attended Case Woodland Elementary School and graduated from East Technical High School.

Turner began his entertainment career in the mid-1950s by performing with a local R&B group named the Metrotones, which included Andy Forester, James Fryerson, Leonard Veal, and Lavinia Eaton. The group performed at high school assemblies and local amateur vocal contests. They also opened up for The Five Keys, The Moonglows, The Flamingos, and Buddy Johnson. The Metrotones broke up when Andy Forester and James Fryerson were drafted into the United States Army. Turner then performed as a solo artist and master of ceremonies inside of local lounges and bars. He served as the opening act at the Chatter Box in a musical show that featured Billie Holiday and Arthur Pricesock.

Turner met Bill Crane, the talent scout for the R&B group, The Platters, while performing as an opening act for Redd Foxx. Crane became so impressed by Turner’s performance that he asked Turner to audition as the group’s lead singer. Afterwards, Turner, his mother and Bill Crane caught an overnight train to Milwaukee, Wisconsin, and met with Platter’s manager, Buck Ramm and the group’s members David Lynch, Herb Reid, Zolar Taylor, and Paul Robbie. That evening, The Platters were appearing at an upscale nightclub in Milwaukee called Club Henrys. Turner sang “Smoke Gets in Your Eyes” in between the group’s performances. Ex-Platter member, Tony Williams, the original lead singer on “Smoke Gets in Your Eyes” was present in the club. Although Williams’ presence caused Turner to become reluctant, he performed and was congratulated by Williams who was behind the stage curtains. The group had a meeting in the dressing room that night, and Turner was made an official member of The Platters. Turner’s first show came in Washington, D.C. when the Platters were the closing performance for a musical show that featured Sammy Davis, Jr. The group also toured internationally and performed for dignitaries in Poland, Russia, Mexico, and Rome.

Sunny Turner was interviewed by The HistoryMakers on November 2, 2007.

See how Sonny Turner is related to other HistoryMakers
Click Here To Explore The Archive Today!