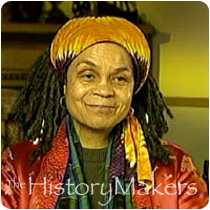 See how Sonia Sanchez is related to other HistoryMakers
Donate Now

Poet Sonia Sanchez was born in Birmingham, Alabama, on September 9, 1934. Sanchez's mother died a year later, leaving the young girl to be raised by her paternal grandmother, who unlocked her gift for poetry. At age four, Sanchez learned to read, and by the age of six, she began to write. Unfortunately, soon after, Sanchez's grandmother died and the young girl drifted between relatives and family friends. Sanchez went on to spent three decades in Harlem, where she studied creative writing at Hunter College, graduating in 1955.

Sanchez counted the negritude poets among her artistic influences, but also found inspiration from her work as an activist with CORE in New York. While with CORE, Sanchez came into contact with Malcolm X, whose direct truthfulness moved her to write blunt, passionate, and painfully honest poetry about the African American experience.

In 1976, Sanchez settled in Philadelphia, and the following year became, chairperson of the English Department at Temple University. During the course of her career, Sanchez wrote several books and collections of poetry that captured, often with wrenching emotion, the plight of her community. Sanchez found herself profoundly affected by the 1985 bombing of a house full of black political radicals affiliated with MOVE, and eulogized them in Elegy: For Move and Philadelphia. Sanchez's 1984 book Homegirls and Handgrenades: Poems won the American Book Award the following year. Some of Sanchez's other noteworthy works include: Under a Soprano Sky (1987); Wounded in the House of a Friend (1997); and Shake Loose My Skin (2000).

Sanchez received several awards for her work both as a poet and an activist. Sanchez traveled around the world to read her poetry, and also wrote children's fiction and plays.

See how Sonia Sanchez is related to other HistoryMakers
Donate Now
Click Here To Explore The Archive Today!